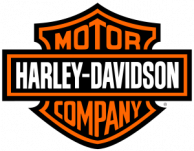 Bikers are a notoriously tough bunch, and it’s not hard to see why. It takes serious guts to take to the streets on a chopper with little to no protection while much bigger vehicles fly by, often without a care in the world for their safety. This renegade attitude, while certainly a credit to the individual nature of each rider, has a lot to do with the image projected by some of the biggest motorcycle brands, namely Harley-Davidson, whose signature orange and black shield logo is almost synonymous with American motorcycling.

Perhaps unsurprisingly, Harley Davidson, one of the most recognizable and most storied brands in the U.S., does not take lightly to any perceived infringements on its intellectual property. The latest brand to suffer its ire is Affliction, a California-based clothing company. The cause for the lawsuit is a new line of Affliction-branded apparel that seems to draw direct inspiration from, if not completely copy, Harley-Davidson’s logo and color scheme.

According to the lawsuit, filed in the U.S. District Court for Eastern Wisconsin, Harley-Davidson was informed of the apparel by a dealer who had received a wholesale shipment of clothing from Affliction. When they saw how the shirts carried a logo that was similar to Harley-Davidson’s, they informed corporate. Harley-Davidson then sent a cease-and-desist letter to Affliction on Oct. 18 that alleged trademark infringement on 20 of the apparel company’s products.

Apparently, Affliction acknowledged the likeness, but only agreed to stop selling six of the allegedly infringing items. This was not enough for Harley-Davidson, as it is now seeking $2 million per trademark for each type of product, as well as profits, damages, attorney fees and the destruction of all existing products that infringe on Harley-Davidson’s trademark. Talk about harsh.

If the similarity of the designs is any indication as to how the court will sway, then Affliction will probably be wishing that it had simply cooperated with Harley-Davidson’s initial cease-and-desist request. From the looks of this lawsuit, and the extent of Harley-Davidson’s demands, Affliction might have bitten off much more than it can chew here.

Let this be a warning to distributors of promotional apparel. Be careful that any branded or insignia bearing apparel does not infringe on any trademarks. If something looks similar to a popular brand’s logo, there’s a good chance that it could lead to a lawsuit or at the very least a recall. Large companies such as Harley-Davidson are constantly on the lookout for these types of things, and if they find any infringements, they will certainly not be afraid to bring down the hammer in order to protect the sovereignty of their brand.