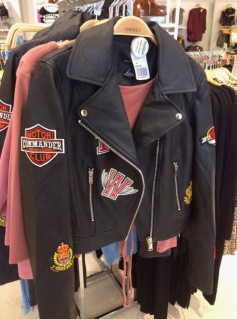 Yes, you read the headline right. Motorcycle manufacturer Harley-Davidson Inc. is suing the fast-fashion, teen retailer Forever 21 for trademark infringement. (We can’t say we predicted this pairing, either.)

According to Milwaukee Business News, the lawsuit alleges that Forever 21 sold motorcycle-style jackets with a patch that copied Harley-Davidson’s famous (and trademarked) bar and shield logo.

While the designs both use orange lettering on a black background with a white border, it’s true the patch is not a direct copy—the Forever 21 jacket patch says “motor club” instead of Harley-Davidson’s “motor cycles,” Forever 21’s patch says “commander New York” where the original says “Harley-Davidson,” and the shape is a little different. But, that doesn’t matter. 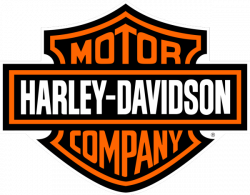 The lawsuit, which was filed last week in the U.S. District Court for Eastern Wisconsin, cited a trademark case from 2009 that ruled the bar and shield logo, no matter the wording, is recognizable enough as a trademark for motorcycles, clothing and headwear. The logo has been used on branded apparel since 1915, and on embroidered patches since 1977, WISN 12 News reported.

As a result of the alleged infringement, Harley-Davidson requested that there is an order enacted that prevents Forever 21 from using the logo; the motorcycle jackets are destroyed; and the company pay for corrective advertising, pay $2 million in statutory damages per mark per type of product, hand over profits from the sale of the jackets, and provide compensatory and punitive damagers.

Forever 21 is no stranger to lawsuits, but, perhaps more surprisingly, this isn’t the first time Harley-Davidson has filed a lawsuit against a rowdy fast-fashion retailer.

According to Bloomberg BNA, the company settled with Urban Outfitters in 2014 after bringing a lawsuit against the retailer for selling legitimate Harley-Davidson apparel that had been “reconstructed”—think cut-off sleeves, altered necklines, opened side seams—as its own.

Apparently moto-chic never goes out of style—even if you’re too young to ride.