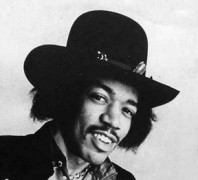 Despite passing tragically at the age of 27 while at the height of popularity and talent, Jimi Hendrix has endured not only as one of the most iconic artists and guitarists of the '60s, but of all time. With such a notable name and likeness, Hendrix has left an enduring legacy, as well as an opportunity for exploitation. In order to battle copyright infringement and other fraudulent efforts for monetization, the Hendrix Estate, lead by the musician’s sister, Janie, acts as the guardian of all things Hendrix.

Now, it seems, a member of the family may have crossed the line, at least in the eyes of the Hendrix Estate. Jimi’s brother, Leon, has moved forward with a partner named Andrew Pitsicalis to develop a line of Hendrix-branded marijuana products. While some would say that this could be a valuable and sensible business opportunity, especially in a time when laws against marijuana usage are weakening or being rolled back altogether, the Hendrix Estate is having no part of it.

This week, Experience Hendrix LLC and Authentic Hendrix LLC, properties controlled by Janie and the Hendrix Estate, sued Leon in New York Southern District Court. At this early stage, the disagreement seems to focus on the commercialization of Jimi Hendrix’s name. Though licensing the singer’s name and likeness for use on promotional and retail products would certainly be extremely lucrative, there could be concerns that a venture such as Leon’s could open up the door to a number of obscure or unrelated industries to benefit off of Hendrix’s legacy.

As Digital Music News has pointed out, similar circumstances seem to have befallen late reggae legend Bob Marley’s name. House of Marley and Bob Marley branded items such as headphones, coffee, clothing and rolling papers are available for purchase in stores and online, made recognizable by their use of the singer’s name and rasta colors. While this may be seen as some as an appropriate monetization of Marley’s legacy, others might argue that these products serve to cheapen his art, and this may be something the Hendrix Estate wishes to avoid.

And, of course, there are ethical concerns associated with selling promotional products for the marijuana industry. While more Americans are seeing the drug as a rather harmless substance on par with alcohol, or even an acceptable form of medicine—and as laws against its use for medicinal and recreational reasons are falling like dominoes around the nation—there are still those who deem it harmful. Whatever your stance may be, it's certainly possible that promotional products providers could face some backlash for going all in on the marijuana vertical.

So, though we may never have Jimi Hendrix branded marijuana paraphernalia, at least we have his genre-bending music, an exploration of blues via psychedelic routes and ‘60s angst that has never lost its power. If for some reason that’s not enough, then maybe a T-shirt will suffice.