Though Glenn Danzig and his mates who make up the punk band Misfits gave themselves a name that signifies being outsiders, we consider the musicians our peers in appreciating the power of promotional products. Through their record company’s partnership with Dead Zebra Inc. and the O-No Food Company, they released a very cool Halloween-themed promo item that sold out within hours of its introduction.

While Misfits promise to give everyone the creeps no matter what the calendar says, the Halloween season offers added occasions for them to up the fear factor. That is especially true since Danzig also formed the band Samhain, whose name is based on the Gaelic festival that inspired our annual October 31 celebrations. According to the Misfits’ website, the six-inch tall "Kill Kat" figures sold out ultra quickly, with 666 pieces crafted of the item that the fortunate buyers should not even attempt to eat.

Aside from the chuckle that the number of products gave us, we appreciate the novelty behind the Kill Kat, which Misfits wisely noted “is not sponsored, endorsed, authorized by, or in any way affiliated with The Hershey Company or any of its subsidiaries or its affiliates.” Nobody from the band, after all, wants to spend any of the money earned from the December show on lawsuits. 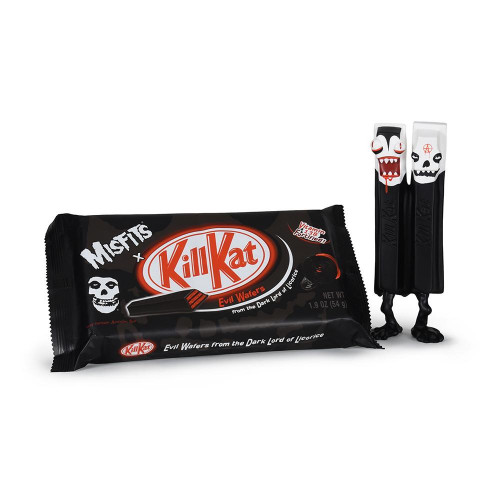 The Kill Kat went fast when Misfits made it available for purchase yesterday. | Credit: Misfits Records

Regarding the description of the vinyl figure, we give Misfits kudos for some pretty awesome word choices, not to mention praise for their continued enthusiasm for bolstering the promotional products business, which an inspection of the other available goods makes obvious. If, as Metal Injection notes, the Philadelphia stop is to be the last gig for Misfits, here’s hoping that they absolutely bring the house down, as they have already done so on the promo side through the figure that’s guaranteed to haunt dreams as well as their songs have done.