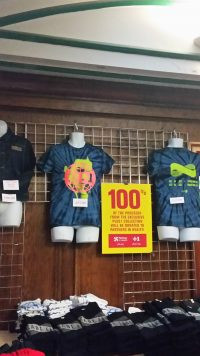 Kendall and Kylie Jenner will inadvertently help a nonprofit to assist residents in developing countries through Arcade Fire apparel sales. (Image via Twitter)

Leave it to the members of the indie rock band Arcade Fire to be the latest figures who have refused to blow smoke up the you-know-what of Kendall and Kylie Jenner. The award-winning tunesmiths have used the initial stops on their Infinite Content Tour to sell T-shirts that feature the celebrity sisters’ faces behind the logo for their upcoming album, “Everything Now.” The move pokes fun (while raising charitable funds) at the two for adding their countenances and initials to shirts honoring legendary music artists.

No matter their status as the youngest members of the Jenner and Kardashian clans that have captivated and confounded the American public since the 2007 debut of their eponymous reality television show, Kendall and Kylie have found themselves subjected to as much scrutiny as their relatives, including half-sister Kim Kardashian West, and have had to keep up with ample backlash for their aforementioned marketing decision. While the $125 price tags were reason enough for folks to gasp, the failure by the siblings, 21 and 19, to obtain or enlist anyone to secure legal permissions to use images of such titans as The Doors and Tupac Shakur has led many people to question not only their integrity but also their sanity.

They have since pulled the shirts, but they will not escape at least some sort of litigious angst. They will, however, help Arcade Fire, who will head to the U.S. and Canada next month following stops in France, Austria, Italy and Switzerland, raise money for the Boston-based Partners in Health, a nonprofit that assists residents of developing countries in acquiring quality health care.

The band’s altruistic swipe at the ladies’ self-serving ways is going for 25 euros, roughly $28.50 in United States dollars, so we here at Promo Marketing are wondering if Philadelphia concertgoers will have the chance to jeer at the Jenners’ expense when Arcade Fire plays at the Wells Fargo Center on September 17.