Yesterday, we reported that the Trump campaign has been using data from merchandise sales to look at its growing reach among undecided voters and new voters since the 2016 election. By releasing merchandise regularly, the campaign can measure change in support and see what messages or strategies play or don't play among the base.

So, needless to say, the money candidates spend on merchandise accomplishes a lot more than just getting their names out there. And they have been spending a lot of money this go-around.

CBS News put together a report of some of the Democratic candidates' spending from this year. It found that in the first half of 2019, the Bernie Sanders campaign spent more than $900,000 on items like buttons, stickers, signs and T-shirts. Elizabeth Warren's spent more than $500,000 for merchandise, and Joe Biden, who didn't join the race until April, spent $150,000 in just a couple of months. 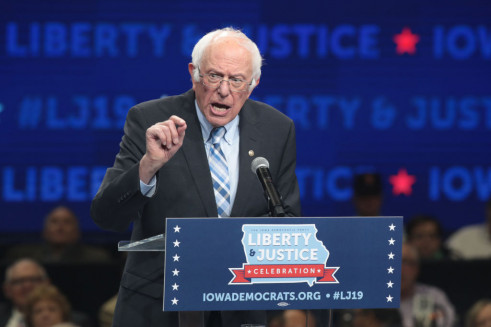 Bernie Sanders is the only Democratic candidate to accumulate more small donations than the Trump re-election campaign so far. | Credit: Getty Images by Scott Olson

Rather than throwing merchandise at the wall to see what sticks (probably stickers, honestly), candidates can use those data points to see what does and doesn't work. One of the hottest selling campaign items of 2019 was Andrew Yang's "MATH" hat. The Yang campaign sold all 500 hats in 22 minutes during its initial launch, and then sold an additional 32,000 since mid-October. Those sales brought in $1.2 million in funding for the campaign—about 8 percent of all of its revenue as of a couple of weeks ago.

Like any merchandise drops, exclusivity drives people to buy and buy now. When the Yang campaign dropped a limited edition "MATH" hat with gold writing, it sold 2,000 in 36 hours, raking in $150,000 in revenue. He later released 500 marijuana-themed "MATH" hats, touching on his plan to legalize cannabis.

Our limited edition marijuana merch is now in stock! Check it out: https://t.co/7N4g1yQb9k pic.twitter.com/cHwlfMlHeQ

You'd think limiting reach and visibility would be counterproductive for a campaign, but when the goal is small donations rather than widespread visibility (you can buy visibility later), Yang hit the nail (hat) on the head.

South Bend Mayor Pete Buttigieg is also following the Streetwear playbook to spur sales. CBS reported that the campaign's one-off "Eco Tee" sold out in under a week.

A lot of these shirts play off of moments from the campaign trail or things the candidates say in speeches. Some are more consequential than others, but it seems like the ones that don't actually have to do with the campaign message do well. For example, after Buttigieg found a bee on his tie at an event in Iowa, the campaign created a "Bee Tee."

Warren and Biden have played things more traditionally, using their established careers as inspiration for merchandise, like Biden's affinity for aviator sunglasses prompting a line of Biden-branded glasses.

An ongoing theme of the merchandise, especially for Biden, is beating President Trump in the election. In terms of spending, some of the Democratic candidates still have a ways to go. The president's reelection campaign spent more than $650,000 on merchandise in the first half of this year alone, and that number is only going to keep increasing as the election draws nearer.

"Whether it's the over 1 million red MAGA hats sold, plastic straws, or fun one-off T-shirts, the campaign merchandise lets voters show their support of President Trump and his policies," Tim Murtaugh, Trump campaign communications director, told CBS News. "It gives people a little ownership of the re-election campaign and gives them high quality merchandise in exchange for their donations."

In the third quarter of this year, however, Bernie Sanders passed the Trump re-election campaign in small-dollar donations, with 1,400,000 million individual donations compared to President Trump's 1,056,000.

As the field of Democratic presidential hopefuls thins out, don't be surprised to see the eventual nominee push an item that tries to rival the ubiquity of an all-encompassing item like the MAGA hat. It might be a "Math" hat, it might be a "Feel the Bern" shirt, it might be sunglasses or it might be a "Nevertheless, she persisted" tote bag.

In the meantime, all of the candidates are trying to find what merch works, and spending a ton of cash doing so.