Yesterday, Hillary Clinton became the first female presidential nominee of a major U.S. political party. While we'll have to wait until November to see if the U.S. will have its first female president, it's still a momentous occasion for women everywhere. However, Clinton's nomination has brought an old Wal-Mart T-shirt controversy back to the surface.

In 1995, Wal-Mart pulled T-shirts featuring the phrase, "Someday a woman will be president" from its shelves, according to The Telegraph. Wal-Mart defended the move by saying that certain shoppers deemed the shirts offensive. 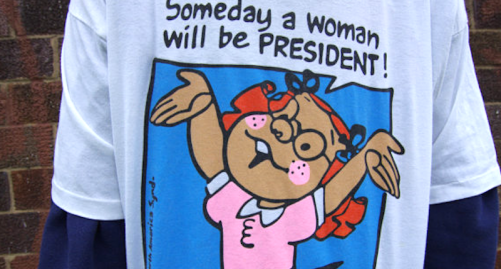 In 1995, Wal-Mart removed T-shirts featuring the phrase, "Someday a woman will be president." (Image via Etsy)

Wal-Mart's decision disappointed the T-shirt designer, Amy Moliver Ruben. She reasoned that the prospect of having females in positions of power was still a "very threatening concept in [the U.S.]," in statements made in 1995, according to The Telegraph.

"[Wal-Mart is] in the position of being a censor," she added. "That's what I don't like. It's humorous and delightful. What could be threatening about that? Evidently, it is to them and their organization."

Women's groups responded to the T-shirts by threatening to boycott the company. Some purchasers even returned the shirts to Wal-Mart, prompting the company to apologize and pull the T-shirts. A company buyer claimed the T-shirt went against Wal-Mart's family values.

However, before Wal-Mart removed the shirts, they were selling very well. The Wal-Mart store selling the T-shirts had sold two-thirds of its inventory in about two weeks, and the store was planning on ordering 100 more before the consumer complaints.

Now, with Clinton's nomination yesterday, Wal-Mart's controversial move is making headlines yet again, leaving many people wondering how Wal-Mart could have pulled the shirts in the first place. If Wal-Mart wants to redeem itself, it might be time to bring the shirts back onto its shelves.