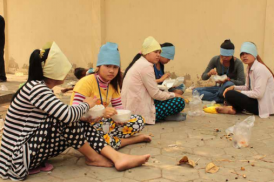 H&M is being accused of exploiting female factory workers in Cambodia. (Image via the Asia Floor Wage Alliance)

H&M is under fire this week as a result of a new report from the Asia Floor Wage Alliance, according to Broadly. The report accuses H&M of exploiting workers in its factories in Cambodia and India. One of the most stunning report findings is that garment workers are routinely fired if they become pregnant.

Factory conditions already are abysmal in Cambodia, with workers being fired for asking for sick days, refusing overtime, etc. H&M has affirmed its commitment to improving conditions for its factory workers, but local activists have pointed out numerous shortcomings.

"H&M has been working actively for many years to help strengthen the textile workers' situation," an H&M spokesperson said in a statement to Broadly. "The long-term process of improving the textile industry continues step-by-step. The continued presence of long-term, responsible buyers is vital to the future development of countries such as Cambodia and India, and we want to continue to contribute to increased improvements in these markets."

"The thing we find with H&M is that they are superficially responsive—they'll answer phone calls and emails," she said. "But they're actually very non-transparent. They won't tell us which factories they're running pilot schemes in, and they've not been forthcoming about how they plan to introduce their living wage."

Cambodia-based activist Tola Moeun described the serious problems garment workers in factories face as a result of pregnancy. Many turn to illegal, unsafe abortions to keep their jobs.

"If you look at the workforce of the garment industry, it's 85 percent female, mostly of childbearing age," she said. "They're almost all on short-term contracts, and they can't tell their bosses they're pregnant because they won't renew their contract[s], so they seek abortions. And when we're talking about abortions in Cambodia, these aren't proper medical abortions."