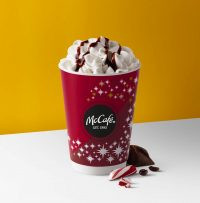 It’s a cold December morning. You wake up to find that a light snow has fallen overnight. From your window you see layers of flakes on tree branches, thin trails of smoke rising from a neighbor’s chimney. It’s Saturday! You could almost shout with joy. Gleefully, you get dressed and make your way outside. Tenderly, you scrape snow from the car’s windshield, sit yourself in that toasty, heated seat and drive to the nearest McDonald’s. It’s the holiday season, and you know what that means: special holiday cups.

Hold on a minute … things got a little out of hand there. My apologies, it’s just that I’ve never been one to fixate on the design of my coffee receptacles. I admit, I’m one of those people who, to quote my colleague Joe Myers, “do not let any trace of controversy intrude upon their November and December coffee consumption.” I’m in it for the caffeine, not the cup.

Now that I’ve made my stance known, I’ve got an interesting story for you. It’s got all the proper fixings: drama, competition, suspicious timing, holiday-themed cups. (Last time, I swear).

McDonald’s has revealed this year’s design for its holiday-themed hot cups. Needless to say, it’s an upgrade from last year’s unintentionally raunchy edition. The red cup features a simple swirl of white stars that surround the brand’s McCafé logo. Pretty harmless, right? Think again! It seems there may be some corporate tomfoolery afoot, as the reveal came on the same exact day that Starbucks unveiled their creative new design.

Giving Good starts with you. Our cup. Your creativity. #GiveGood pic.twitter.com/KyTb7lP6qI

As you may remember (or as you’d very much like to forget) Starbucks’ holiday cups have been touchstones for controversy over the past few years. Most notably, some groups claimed that their failure in 2015 to reference Christmas was a sign of the so-called “War on Christmas.” Fast-forward two years, and Starbucks’ new cups feature a plain white design that encourages consumers to color the cup’s many images however they please. McDonald’s, on the other hand, has chosen a more straightforward design—or have they? Is that the red of Santa’s jacket? Are those Stars of Bethlehem I see? Has McDonald’s reignited the War on Christmas?

Short answer: probably not. Starbucks’ cups also feature presents, a Christmas tree, and a pair of doves, while McDonald’s’ cup design seems to be a neutral and inoffensive ode to winter and holiday cheer. Also, in case you’ve forgotten, McDonald’s has ignited its fair share of controversy this year as is.

Sorry for the tease, but I had to draw you in somehow. Both companies have come up with designs that cater to a neutral consumer, and even allow for some imagination. As for the timing of McDonald’s release, it likely boils down to a case of standard competition, with the fast-food giant looking to get a cut of Starbucks’ success in the holiday season.

If after reading this you still want controversy, just be sure to leave me out of it. In the meantime, I’ll be enjoying winter on my own terms: feet up, a good book in one hand and a nice, hot cup of coffee in the other. Oh, and yes, I’ll be brewing it myself.

Sponsor Content Introducing QNCH™–Custom Drinkware for Your Next Promo