Saying "I've been a fan of this team since I was in diapers" has a whole new meaning now. Major League Baseball has partnered with The Honest Company to create a line of licensed personal care items, including diapers.

So far, the diapers come with six teams' logos: the Red Sox, Yankees, Cubs, Giants, Cardinals and Dodgers. Right now, they're only available at Target, but starting in May, they will be available at more retailers and on The Honest Company's site. 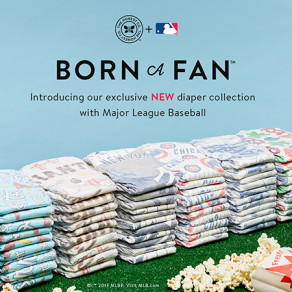 The Honest Company unveiled its "Born a Fan" collection of MLB-branded diapers. (Image via Adweek)

"Looking at the niche area of consumer products, [we asked ourselves:] 'Where are we not?'" Noah Garden, executive vice president of business for The Honest Company told Adweek. "This was one of those places."

Actress Jessica Alba, founder of The Honest Company, told Adweek that the idea also stemmed from her family's love of baseball, and how baseball has always been a family-friendly activity for all ages.

This development begs the question: Are diapers viable promotional products? Given their single-use nature, it seems like they wouldn't be good for long-term brand visibility. Still, most parents go through an awful lot of diapers, so maybe they would work. But, if it's good enough for MLB, who else might hop on this bandwagon?

(Editor's note: As a baseball fan, I couldn't help but notice that these diapers came in pairs of rivalries. Sox-Yankees, Dodgers-Giants and Cardinals-Cubs. It wouldn't surprise me if Yankees fans end up buying more Red Sox diapers for, you know, obvious reasons. I'm just saying, if they make Mets diapers, I might just have to pass them along to family members with babies.)

10-year MLB Uniform Deal Is Big News for Under Armour