With 32 franchises whose valuations each check in at more than $1 billion, the NFL definitely deserves distinction as an economic Goliath. However, the powerhouse will never be above serving as the opponent to those who want to emulate David and regulate its reach. Yesterday, as they prepared for what they hope will be a triumph in Super Bowl LII, Philadelphia Eagles Lane Johnson and Chris Long celebrated another victory, as the NFL, having initially sought to add to its coffers by peddling T-shirts that call to mind the Birds’ postseason role as underdogs, will instead join the aforementioned athletes­—sellers of their own garment that reflects a desire to silence naysayers—in donating proceeds to local public schools. 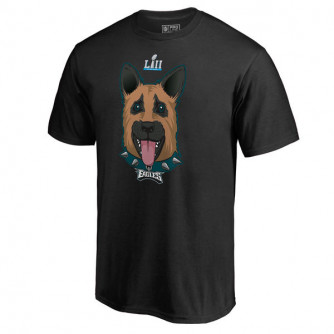 For the third-straight game this playoff season, the Philadelphia Eagles find themselves playing the underdog role. | Credit: NFL Shop

Matters grew a tad dire in the City of Brotherly Love Dec. 10, with second-year quarterback Carson Wentz having torn the ACL in his left knee versus the Los Angeles Rams. Many “experts” immediately declared the Eagles a goner, and prognosticators assigned them underdog status for their Jan. 13 divisional round home playoff tilt against the Atlanta Falcons. Helping to defeat the defending National Football Conference (NFC) champions, Johnson and Long broke out German shepherd masks, leading the city to rally even more behind its beloved Birds.

Already admirable philanthropists for recent efforts, the two teamed up to release a “Home Dogs Gonna Eat” shirt, with returns benefiting the School District of Philadelphia. The top picked up instant buzz and received another publicity push Sunday when the Eagles, though the No. 1 seed in the NFC, throttled the Minnesota Vikings, whom odds makers had installed as the favorite, 38-7 in the championship game. Ever the opportunist, the NFL, through its official shop, notified Long on Monday that its apparel creation would serve as a nice complement to the Birds’ masks, but he and Johnson, whose club will again be an underdog when it faces the American Football Conference’s New England Patriots Feb. 4, would have none of such a potential money grab. Taking the league to task, they suggested that it assist the nation’s eighth-largest school district, too. To those who had been holding their breath in the hope that the business behemoth would not only acknowledge but implement the suggestion, we say enjoy your exhalations, as the NFL Shop tweeted that every cent from its sales will help to educate the thousands of youths whom the district enrolls.

In becoming aware of the announcement, yours truly gave the NFL a head nod, finding the powers that be the recipients of their own sort of valuable lesson. Yes, it is great to make a buck, but doing so off a concept that so blatantly rips off a product rooted in altruism is not the way to go. With 11 days to go until the Eagles and the Patriots square off in Minneapolis’ U.S. Bank Stadium, each shirt has a great opportunity to boost not only sports-related morale but also hopes for a brighter future for Philly’s children. Here’s hoping the teams stage a classic, with the Birds soaring to the Super Bowl pinnacle for the first time.