This Smartphone Accessory Renders It Useless, and It Could Have Huge Promo Possibilities

We've all been there: You're at a concert or a comedy show and the person in front of you holds up their phone, recording the show they're seeing with their own eyes for the sake of made up internet points and accolades of "friends." It's a necessary evil of the 21st century. But is it that necessary after all? A lot of performers don't think so, and have teamed up with companies to force viewers to once again focus on the art at hand rather than the temptation of documentation.

(Insert griping about "kids these days" always needing to be on smartphones, etc.)

Enter Yondr, the company that has teamed up with the likes of Dave Chappelle, Jack White and Glenn Danzig to nix cellphone use for the sake of eliminating distractions from the stage by creating cellphone pouches that are locked by event staff. 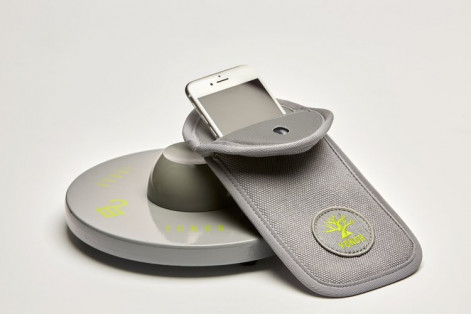 Yondr pouches lock smartphones inside during performances and other events, and require a special item to unlock. | Credit: Yondr

Upon arrival, fans silence their phones and place them in a neoprene pouch. A security guard will then lock the bag, and the fans can't open them without assistance.

It's an accessory that renders a smartphone totally useless, but as it's gaining steam in the entertainment industry, it's not out of the question for these entertainment figures to slap their own logos on the pouches. Think about the Las Vegas residencies of musicians and magicians. If they started limiting cellphone usage at shows, we could totally see Carrot Top or Cirque du Soleil branded Yondr pouches.

Don't worry, your cellphone isn't completely gone, though. For people who might be concerned about a babysitter or emergency, the pouches can be unlocked quickly outside of the venue, and most places have dedicated cellphone usage areas, like a smoking area in a park.

It's not just artists, either. Yondr listed schools and government facilities as places where the pouches are good for use.

You can only ask people politely to stop using cellphones so much. This is a fair (but effective) way to limit cellphone usage at inappropriate times. And it has great branding opportunities for artists, concert venues, theaters, schools and government agencies.