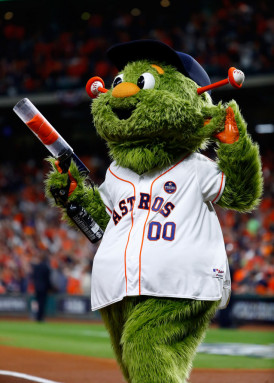 A Texas woman is suing the Astros after reportedly being injured by a T-shirt cannon. | Credit: Getty Images by Jamie Squire

We've been saying for a while that T-shirt cannons are the most fun and exciting means of delivering free T-shirts to fans at sporting events. But it's impossible to watch them in action without thinking that they absolutely have the potential for bodily harm. Australian police even went as far as classifying them as weapons.

A woman in Houston probably agrees, as she's claiming her finger was "shattered" when Houston Astros mascot Orbit fired a T-shirt into the crowd.

Jennifer Harughty told the Houston Chronicle that she was sitting about halfway up the first level on the third base line at the ballpark when Orbit fired a T-shirt into the crowd, hitting her index finger "head-on." The injury reportedly required two surgeries, two screws and regular physical therapy.

She told the Chronicle that she "continued to suffer pain, swelling and loss of range of motion," and that after the second surgery in October, her finger "remains locked in an extended position with little to no range of motion."

Harughty filed a lawsuit against the Astros organization for more than $1 million.

According to NBC, the Astros released a statement that the organization is aware of the lawsuit, but won't stop firing T-shirts into the crowd in the meantime.

"We do not agree with the allegations," the statement said. "The Astros will continue to use fan popular T-shirt launchers during games. As this is an ongoing legal matter, we will have no further comment on this matter."

Harughty's lawsuit contends that the Astros were negligent in that they did not adequately warn fans about the risk of T-shirt cannons and did not properly supervise ballpark staff to ensure fan safety.

This actually isn't the first ballpark cannon-related incident. Last year, a woman was injured when the Phillie Phanatic launched hot dogs wrapped in duct tape into the crowd.

"It hit me like a ton of bricks," injured Phillies fan Kathy McVay told 6 ABC. "My glasses flew."

She walked away a little better off than Harughty, just with a few bumps and bruises, and didn't pursue any legal action against the team. And she offered some advice to fans for the future.

"Just to be aware, because you never know," she said. "I understand a baseball, but not a hot dog."

The writer for 6 ABC even got to type this wonderful line:

The Phillies reached out to McVay directly to apologize. We're told the Phanatic feels terrible about what happened.

There's been no word on whether Orbit feels personally responsible for what happened to Harughty, but it's clear her injuries were more serious than those in Philly. The Astros seem pretty resolute in their continued usage of T-shirt cannons, and it appears they believe fans know the danger of T-shirt cannons when they attend a game.

So, the debate rages on. Are T-shirt cannons dangerous, or are they an awesome way to give excited fans a free T-shirt? Maybe they're both.