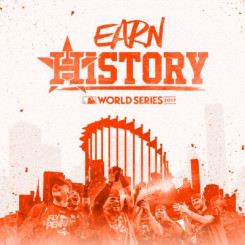 The Houston Astros will be the American League's representative in the World Series. (Image via Twitter)

I follow baseball and weather phenomena quite closely, so when Hurricane Harvey devastated Texas from mid-August until early September, I hoped not only that organizations and selfless individuals would assist the distraught residents, but also that the Houston Astros could prove a secondary source of hope by continuing their quest to capture the franchise’s first World Series crown.

While the Lone Star State still has many inhabitants who need tangible assistance, those dwellers and others throughout the nation’s second largest state can indeed proclaim the baseball club a provider of tenacity’s rewards, as the organization, just four years removed from posting Major League Baseball’s worst record, will contest Game 1 of the Fall Classic tonight. The impending duel against the Los Angeles Dodgers has drawn immense enthusiasm from merchandise-hungry supporters and is thus offering distributors a valuable reminder given the Astros’ relatively rapid rise to stardom and the Dodgers’ marketability.

The Astros, who conquered the American League West with a 101-61 mark, prevented a throwback postseason matchup by blanking the New York Yankees 4-0 in Saturday’s Game 7 championship series tilt. That victory led to a massive rush for apparel throughout the city. And though diehard backers—many of whom had to endure horrendous baseball from 2011 through 2013, a span that yielded 324 losses—will have to wait until Friday to show off their gear for the masses at Minute Maid Park, they no doubt will hope for their heroes to extend the Dodgers’ title drought to three decades and add to their amazing collection of diamond-generated memories.

While Astros Fever makes for an especially feel-good affliction because of the team’s rejuvenation as a contender (the Jeff Bagwell- and Craig Biggio-led era that culminated with an appearance in the 2005 World Series was immense fun to behold) and Houston’s slow rebirth, it also inspires an interesting look at licensing and marketing.

The Houston Chronicle addressed the adulation that the current crop of superstars, including Jose Altuve, Carlos Correa and Dallas Keuchel, has received and made note that a Dick’s Sporting Goods had quickly sold out of many items, adding “The merchandise is made locally, which makes it easier to restock.” Therein lies a lesson, especially now that we are on the brink of the World Series, the NBA and NHL seasons are beginning to unfold and the NFL has begun to weed out which teams are prime contenders for the Lombardi Trophy.

The hunt for championship glory often finds many folks taking the cottage industry approach to making a ripple in the merchandise business, and that method can often attract distributors whose clients are eager to craft tie-in promotions for shirts, hats and other goodies. For most promotional products industry presences, this will go without saying, but everyone must be mindful of trademarks and licensing agreements. Clubs that are looking to gain athletic immortality (I’m calling for the Astros to win in six, but I would definitely not mind seeing former Philadelphia Phillie Chase Utley win another ring) will make enough money off legitimate sales. Who wants to have legal fees accrued from branding violations adding to any franchise’s coffers? The Astros and Dodgers have put in the hard work, and in your respective field, the expectation is that you will, too.