How a UK Business's Branding Reimagined the Funeral Service Industry

It's easy to rely on tradition. Certain businesses and industries have adopted particular aesthetics, and as an extension of that they want their advertising and branding identities to look a certain way.

But, there are always opportunities to flip the script when it's appropriate. And one funeral service business in the U.K. has made branding part of its mission to reinvent the way we think of the funeral and memorial process.

It's a tricky business to be in. There are emotions that funeral directors and employees have to account for that other businesses don't. Poppy's, the London-based funeral company in question here, has made its mission transparency and informative throughout a difficult time. The company's promotional branding has played a large role in that, creating a modern, calming and, dare we say, very stylish identity for a business in an industry that is typically anything but "pretty."

According to It's Nice That, Poppy's worked with the creative agency Lovers to hone in on this exact branding experience.

"Steering away from the hushed an often un-instructive nature of many funeral brands, Lovers has chosen to incorporate illustrations," It's Nice That wrote. "Simple graphics are placed alongside guides such as 'Demystify the Mortuary.' Meanwhile, Lovers describes the identity as typographically 'gentle'; colors take their cue from the way 'light passes through poppy petals, revealing subtle variances in light and tone.'"

This means products like printed pamphlets for prospective customers and families, each using attention-grabbing, but not overly celebratory, color schemes. They counter what we might think of when we hear "funeral service" — dark, neutral colors. Muted corals and yellows are bright and happy, but not gauche.

We're taking the conversation about the importance of great death care out on to the high street this week #talkingdeath #funerals pic.twitter.com/yoD8gWX2a5

"As funeral directors we're trying to figure out how to gently and thoughtfully represent our work in a way that rings true with grieving people, who are often exhausted," Poppy Mardall, founder and director of Poppy's, told It's Nice That. "They often haven't arranged a funeral before."

The branding for Poppy's brings the funeral industry into the 21st Century with its minimal and modern design elements and color usage. Illustrations are simple depictions of people using mostly flat line work. The fonts are basic. The design is very literal.

Those design elements also made their way to other physical products, like signage, vehicles, and even tote bags and pins. 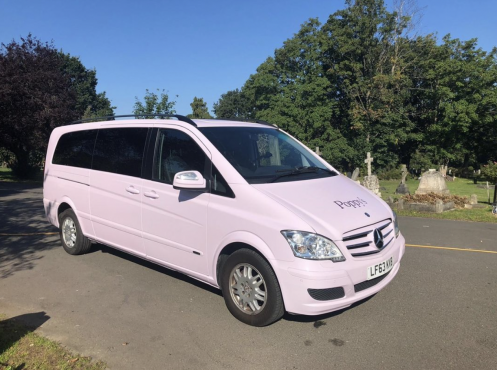 We need an outstanding leader as our next Chief Operating Officer – with the critical challenge of tripling our capacity over the next 3-5 years, whilst nurturing the magic and humanity at the heart of our service. Are you up for the challenge? Apply here: https://t.co/GK5Si9lNJq pic.twitter.com/L5BsoL16gt

It's natural to think that people don't want to wear or carry merchandise relating to a funeral parlor. But, why not? If they had a positive experience for a loved one, and it helped them reframe their mindset toward the whole process, it's not farfetched that they might appreciate a branded product like a bag or pin.

And the way the print products are designed are intentionally disarming. They're small, they balance illustration with text. They're far from the overwhelming information pamphlets that one might receive at a time like this.

So, what does this have to do with promotional products distributors? Well, for one, it shows that no business is above innovation and growth. There are always opportunities to challenge the status quo and break tradition, but it must be done delicately. There was real finesse involved with the branding around Poppy's. If not done correctly, it would have been inappropriate and offensive, and would have resulted in a failed business.

But by really listening to what the brand wanted to communicate through its branding and its services, Lovers created something fresh and interesting that could change an entire industry.