How BAMKO Increased Q2 Revenue by 218%

In an earnings call Wednesday, Superior Group of Companies, parent of Los Angeles-based distributor BAMKO, announced record operating results for the second quarter 2020, including a 73 percent increase in net sales to $159.4 million. BAMKO was largely responsible for that growth, reporting that its Q2 2020 sales increased by 218 percent year over year to $75.5 million.

Most of that total, $49.7 million, was in PPE, which in itself is not surprising. Many distributors have found success in the PPE market, with some able to fully offset losses in other product categories and, in some cases, grow overall sales through PPE. But BAMKO's numbers are staggering. In 2019, the company's total sales were $115.2 million. In Q2 2020 alone, its sales were $75.5 million.

"Our success in the PPE space has been about having a really good sourcing operation that has been able to find solutions that our competitors can’t," said Jake Himelstein, chief operating officer and chief financial officer for BAMKO. "The market disruption that created the PPE frenzy was a supply issue. Demand was abundant and easy to identify. That demand is ever-shifting in terms of industries, verticals and product types, but if you are paying attention, the demand is certainly there. The name of the game has been identifying the demand and finding the supply to meet the demand. The latter is not a core competency that’s in the wheelhouse of most distributors. BAMKO has always been a highly-capable sourcing organization. When the market shifted and finding supply became the name of the game, that’s a game we were well suited to excel at." 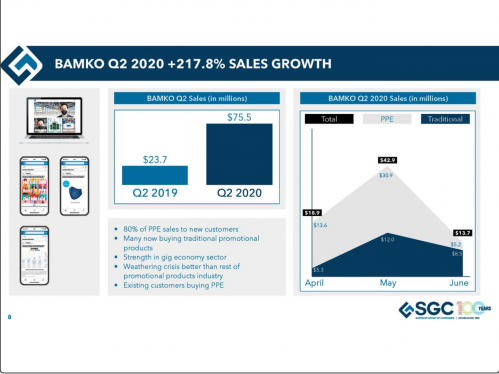 On the earnings call, Michael Benstock, CEO of Superior Group of Companies, said close to 80 percent of the company's PPE sales were to new customers. Some customers, he said, turned down PPE business from BAMKO early on, but came back when other sourcing partners were unable to deliver product.

But it wasn't just PPE. BAMKO's sales of non-PPE promotional products were up overall, from $23.7 million in Q2 2019 to $25.8 million in Q2 2020. And the company reported strong sales from the gig economy sector, with record sales in the grocery/meal delivery service and at-home fitness solutions markets offsetting declines in other industries. Benstock said BAMKO has also been able to convert PPE customers to traditional promotional products. 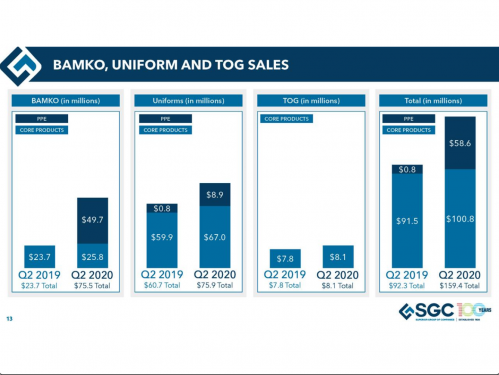 Joshua White, senior vice president of strategic partnerships for BAMKO, also attributed the company's success to its in-house sourcing operation, as well its culture of speed and urgency and its ability to rapidly adapt to changing market conditions. Instead of a single pivot, he said, BAMKO saw a relay race—"a series of sprints from one set of opportunities to the next that required that we nail the baton pass as market demands changed."

"We’re focused on accurately diagnosing opportunities in the present and being agile enough to capture them," White said. "To us, speed, agility and adaptability are the keys to excelling in a rapidly shifting business environment. If this year has taught us anything, it’s the importance of having the humility to know that we don’t quite know where things are headed and the resolve to figure things out regardless of what twists and turns are thrown our way."

In a letter to shareholders, Superior Uniform Group said it anticipates record 2020 sales. Benstock said the company has a strong backlog, with an additional $52 million in PPE sales (including its uniforms business) lined up and expected to ship in Q3 and Q4.

"I can’t get into specifics of strategies that have created that success, but I can tell you that it stems from a clarity of culture, mindset and philosophy," said White. "We know who we are. BAMKO is exceedingly entrepreneurial by the standards of this industry. In times of great disruption, companies that are able to act quickly, boldly and decisively are able to seize opportunities that tepid and indecisive competitors cannot. Our modus operandi is to create opportunity where others see adversity and operate with an extreme bias towards action."