How Long Was This Denver Broncos Blanket With the Wrong Skyline On It For Sale Before Anyone Noticed?

We're starting to think the NFL has a geography problem. Back in 2013, it was a Carolina Panthers shirt with the wrong Carolina on it. In June, it was a Washington Redskins novelty license plate featuring Washington State (they play in Washington, D.C.). And now, it's a Denver Broncos blanket with Salt Lake City's skyline, obviously.

KUSA, an NBC affiliate in Denver, was first to report on the blanket. The site found it and a similar variation for sale at Home Shopping Network, Kohl's, NFL Shop, Fanatics and several other online stores. Most of those sites have since removed the listing, but some still show the variation, which features a large Broncos helmet that partially obscures the skyline.

And here's the original, with the full skyline in view: 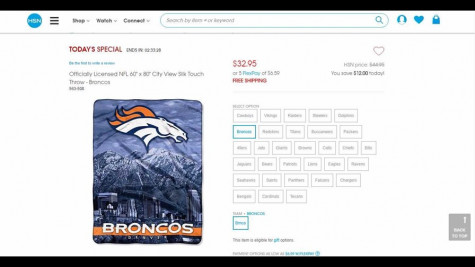 How long this thing was for sale is anybody's guess, but based on its wide availability and the pair of variations we're assuming it was up for awhile.

Still, we'll be the first to admit we would not have noticed this error on our own—Denver isn't exactly known for its skyline, and Salt Lake City even less so. The giveaway, apparently, was the Mormon Tabernacle, visible just left of center on the above image. KUSA said it first looked into the erroneous blankets after a tip from a viewer, who saw it on Home Shopping Network. That's impressive. Good work, anonymous viewer.

Intrepid reporters that we are, we investigated the rest of the blankets in this series on NFL Shop to see if any others had similar decorating errors. They all seemed to check out, but our search did raise some questions about just how Denver's blanket got messed up. Follow along with us:

No one is impervious to decorating errors or design mishaps, but the NFL has had a rough go of it lately. At least this particular geography snafu isn't quite as bad as this one.

Related story: We Ranked 14 NFL Teams by the Promo Items They Sent One 'Free Agent' Fan

New Denver Broncos Hats Made From Four Water Bottles Each

An NFL Team Is Turning Stadium Banners into Bags