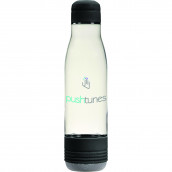 A Bluetooth Tritan bottle from Leed’s, similar to the one used by Wilson

Sometimes you just have to bet on yourself. That can mean taking a stronger approach to your self-promotion, or it could mean having the courage to make a big change in your professional career. Keith Wilson, sales partner at Public Identity, Los Angeles, did both, and it paid off in a big way.

Promo Marketing: Can you tell us about a promotion that stands out as one of your best?

Keith Wilson: There’s one that when I look at it with that criteria, I think, “Did it take a lot of time? No.” I was basing it more off of success that I had from it. And that is just making that bet on your clients by spending the money on a gift item to send out to them pre-holidays to open up a dialogue and get them thinking about what they’re going to do on holiday gifts. In this case, I used the Bluetooth speaker bottle from Leed’s, the one that was made with Tritan, which was $20 on an (R), versus the one that was stainless, which was $30 on an (R). Just for price points, I could send it to enough people. Did everybody turn around and buy the Bluetooth bottle? No. But it opened up a dialogue, and they said I landed a $188,000 order for holiday gifts for Bluetooth earbuds in a charging cradle from that mailer, from the dialogue that it opened up with a client of mine from New York. A different client, a music company, said, “This one’s a little too low-end for us.” And we moved them over to a more high-end and sleek model that fit their branding, and they gave me a $12,000 order. They ordered 400 of them for $35 each. So, I sort of had to quantify, “Wow, I spent $1,500 on the self promo and the freight, and I got back over $200,000 in orders.” And I said, “That’s sort of a parlay that I’d make all day long, especially at the margins I was able to make.”

PM: What did you like most about this promotion?

KW: In particular, I liked that each and every recipient thanked me and called me, and either asked me questions about how to use it, or what the best application is, or is there a better model that has better sound, or is there a less expensive model that can fit a $10 budget. But, it got everybody to engage, because they say the sweet spot in our industry is $20 in terms of a giveaway to an employee or a good client. Twenty bucks is the sweet spot. And that’s what the Bluetooth Tritan audio bottle was priced at. They asked if there was a $10 version, and then those who said, “We’ve got more budget. We want it a little nicer” went with the $30 or $35 version. But, I’ve done self-promos for 24 years, and tried to out-think the room and be too cutesy on them, and at the end of the day, the POs and the commissions are what we live on. And this one had the best return on investment for me in a long time.

PM: What advice would you give a distributor looking to do something similar?

KW: Well, I would say, when you’re doing a monthly mailer or quarterly mailer to your clients, to get that live touch, take the road less traveled. Don’t do what everyone’s doing. Don’t jump on the freeway that everyone’s already on. Go off the beaten path. Be different. Beat to your own drum. And also, don’t always use the vendors that everyone uses. Sometimes when you go to PPAI Expo or you go to Promo Marketing Power Meetings, find those nuggets that are from vendors that aren’t being shown, which makes you that much more different because people haven’t seen it already. For me, that is the key. Go off the beaten path and really walk the shows and attend those meetings with your eyes and ears open, not as much at the big vendors—the Walmart and Kmart vendors—but at the mom and pop shops that have the stock to handle their orders, of course. Just be different.