In 2018, Denver, a young woman living in the Minneapolis area, was in a bad spot. She was having trouble finding work, which soon led to housing instability, making it even harder for her to find a job. “I was sleeping on the concrete,” she says. “During that time, like, I thought I was gonna become one of them addicts, you know. I’m not gonna lie. I didn’t think I was gonna make it.”

Denver, on the verge of homelessness, found Hippy Feet, an apparel company based in Minneapolis. Hippy Feet gave Denver a job in its pop-up employment program, where she could earn a regular income and learn skills in the apparel business. After a few months, she landed an internship at another company, and later a full-time job. Today, she’s still working full-time while pursuing a technical degree in electrical work. She credits Hippy Feet for giving her a chance.

“It’s possible that you can pursue any career that you want to do, as long as you’re driven and persistent with it,” Denver says. “Maybe I could be an entrepreneur and wanna start my own business. Without Hippy Feet, you know, that wouldn’t have been possible.”

Denver is just one of many Minneapolis-area youth Hippy Feet has assisted in its four years in business. But Sam Harper, who founded the company in 2016 alongside co-founder Michael Mader, downplays his company’s role. “Ultimately, it was Denver’s own work ethic that allowed her to get to where she is today,” Harper says. “Hippy Feet was just there to give her an opportunity and open doors where other doors had closed. [We create] these jobs as short term, transitional opportunities. We're not trying to be anyone’s 'forever' employer. Instead, we're looking to provide supplementary income to help that person get on to the next stage of self-sufficiency.” 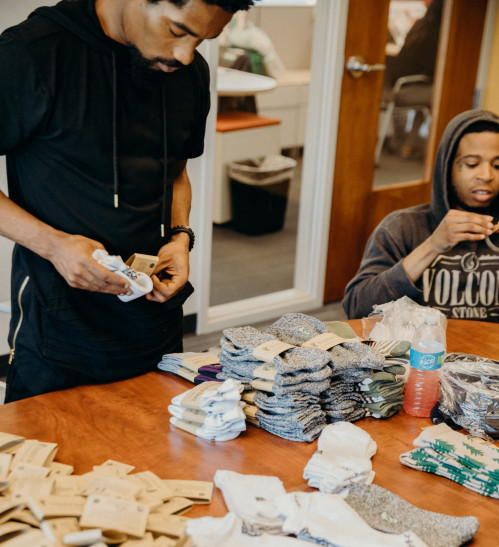 Harper might not be giving his company enough credit, though. Hippy Feet, which specializes in socks but offers a variety of apparel, has created more than 1,900 hours of paid employment through a program that has generated short-term income opportunities for more than 130 homeless teens and young adults aged 16 to 24. Hippy Feet brings the jobs directly into homeless shelters, providing a safe work environment and teaching skills like embroidery, screen printing, product assembly and packaging.

And this kind of thing Hippy Feet was built on. Harper and Mader started the company after reading that socks were one of the most needed but least donated items at homeless shelters. They donated a pair of socks for every pair sold, reaching 20,000 pairs shortly after they launched. Wanting to have a more meaningful impact, they soon implemented the employment program that would go on to help Denver and hundreds of others. Beyond that, the company manufactures and decorates locally, supporting its community with full-time jobs outside of those created in the program.

“There are three values that guide everything Hippy Feet does,” Harper says. “When we first launched, we agreed that we wouldn't compromise on any of these values. All of our products would be American made, eco-friendly and help someone in need. This really makes us unique today. Other large sock companies may donate socks, but most are producing their products overseas with synthetics. We're having a deeper impact on the people we're helping and making a better product while we're at it.”

Promotional products play a major role in that mission. The company got into promo in late 2017, working on custom orders from Microsoft, the Minnesota Timberwolves and several major universities. Harper says branded socks and other apparel now make up about 40 percent of Hippy Feet’s total revenue and 60 percent of its total products by volume. This business has helped the company maintain its employment program even during the pandemic, with Hippy Feet now back to pre-pandemic sales levels after an early drop-off in April and May. 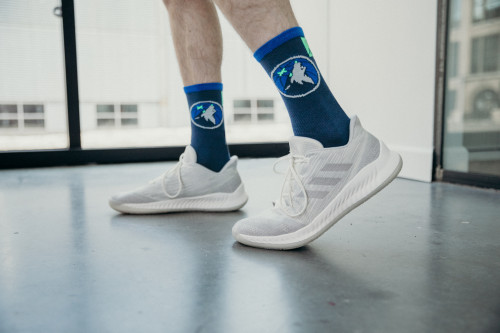 “We're finding that our customers are starting to put their values into their promo product shopping,” says Harper. “In this case, many companies are looking for products that are American-made, environmentally-friendly or have some sort of social benefit. Our goal is to become the go-to promo partner for companies. We want to offer more custom product solutions and an amazing customer experience so that working with Hippy Feet is an easy decision for companies.”

Since the start of the pandemic, we’ve seen a number of promo companies giving back to their communities and supporting a variety of causes, even as they’ve dealt with struggles themselves. Harper believes there’s room for more—that anyone in the industry can make a difference.

“I always love talking to others in the promo industry because it's generally a group of people who operate with integrity and want to meet and exceed customer expectations,” he says. “I’d urge other promo companies to continue this integrity when looking to make an impact in their community. Support the causes that are close to your heart and you believe make a real impact. If you're just doing it as a marketing ploy or to look good, it's going to come across as inauthentic. When you support a cause that you truly believe in, it gives you that added motivation to push through hard and uncertain times.”