Analysts: Consumers Could Feel Impact of Tariffs by Fall 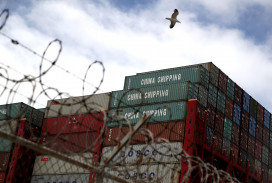 The long list of new tariffs, a retaliatory move from the U.S. after China's response to the initial tariff list, includes a lot of items with direct links to the promotional products industry, as well as the consumer sector.

With the most recent list including $200 billion worth of goods and the prospect of the total reaching $450 billion, economists worry that the U.S. is on the brink of a full-on trade war, but said that consumers don't have to worry just yet. However, if things continue the way they're currently unfolding, consumers could feel the effects of the tariffs on pricing by this fall.

There's still a two-month period before the final list is confirmed, so there's a chance consumers aren't impacted. Some companies, though, are already dealing with issues. Harley-Davidson said the first round of European Union tariffs forced it to move some jobs overseas, and U.S. agriculture businesses are seeing negative impacts from Chinese tariffs, as well.

Fabrics, which are exported to the U.S. in large quantities, since certain products aren't made in the U.S. or only made in small quantities, make up a large chunk of the new round of tariffs, possibly impacting textile and apparel prices in the U.S. Additionally, the back-and-forth between the U.S. and China could cause increased inflation. MarketWatch reported that U.S. prices have already reached their highest level since 2012. An increase in tariffs could result in a related spike in pricing.

Higher inflation would eat away at what workers earn, offsetting the benefits of annual pay increases. And rising prices would put pressure on the Federal Reserve to raise interest rates more aggressively, potentially narrowing the arteries of the U.S. economy.

"Even though the tariffs actually imposed up to now are relatively small in comparison to overall trade flows and gross domestic product, it is hard to see how a full-blown trade war can be avoided at this stage," Paul Ashworth, chief U.S. economist at Capital Economists, told MarketWatch. "There is no one left in the administration or in Congress to rein in President Donald Trump's long-held protectionist beliefs and other countries are not shying away from the fight."

In addition to the hostility with China, the U.S. is still working on its relationship with NAFTA allies Mexico and Canada, the former of which just elected a new president.