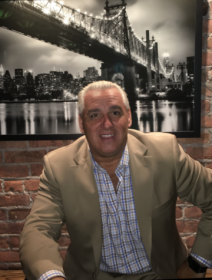 Chuck Lennon of Team Logic IT has worked with Schifano on several projects over the years. “I teach sales people on the nuances of how to sell more effectively and I always use Gerard as an example of the sort of sales person I want them to emulate: a highly effective sales person who does not try to sell,” Lennon said. “Gerard closes a lot of sales but he does so by building a relationship and making people feel good about buying.”

Since Hub Pen acquired Beacon Promotions earlier this year, Schifano has been working with Beacon rep Sharon Schiffelhuber in his territory of New Jersey, and southern New York. “I’m absolutely ecstatic our teams are working together and I applaud the fact that two giants in our industry can come together to join forces,” he said.  “It’s refreshing to uncover customers that have been so loyal to Beacon Promotions over the years and vice versa for Hub customers to Beacon.”

“Gerard shows true passion for his customers and has totally embraced the HUB/Beacon partnership,” said Lisa Pelzel, Beacon Promotions’ business development manager. “He continually searches for creative solutions and does whatever is needed to satisfy the client, making him a delight to work with!”