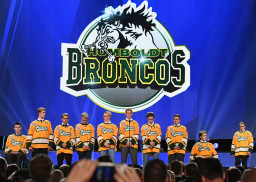 The NHL has been on break since June 4, but that has not meant fans have had to pine for the start of training camp to sate their infatuation, as other action is keeping skates laced and attention spans rapt. Along with always being able to rely on their supporters’ allegiance, leagues can also count on their backers to show their compassionate sides, too, as numerous charitable causes have benefited from their generosity. One such display of kindness has been occurring since an April 6 bus crash claimed the lives of 16 individuals affiliated with the Humboldt Broncos junior ice hockey team, with a Saskatchewan-based clothing store issuing "Humboldt Strong" shirts that generated more than $300,000 for a community foundation.

Previously, a GoFundMe campaign yielded $15.2 million for the junior hockey squad and roster members’ families. That first instance of good will and the T-shirt brainchild also run counter to a poorly executed attempt by Redbubble to profit off the tragedy, which it sought to do by placing a Halifax Chronicle Herald cartoonist’s homage to the fallen figures on an apparel item. With respect to the lucrative T-shirt concept by Spotlight Sport and Corporate Wear, the emphasis has been on helping the Saskatchewan area to heal and assist the return to prominence for the Broncos, who have enjoyed considerable success as constituents of the province’s junior hockey league.

The day after the unfortunate incident, Spotlight Sports and Corporate Wear began placing “Humboldt Strong” on T-shirts, with the Global News reporting that owner, Mike Yager, had thought he would “maybe come up with $10,000” to donate to the Humboldt Strong Community Foundation through the sale of “a couple hundred shirts.” The businessman, however, has sold more than 12,000 tops, resulting in $304,239.90. With interest coming from numerous countries, Yager’s business helped to prove that no matter one’s rooting interest, hockey fans rally around every chance to support those who provide them with amazing goals and breathtaking saves. As for the proprietor, who presented a check to the Broncos on Monday, he will be producing merchandise on behalf of the Broncos and could come to create items for the upcoming season.

With a new coach and talk of a permanent memorial at the site of the crash, the Broncos, as difficult as the task might seem, have spent the summer displaying exactly what Yager’s design commends them for, their strength. As a new season beckons, expect for Spotlight Sport and Corporate Wear to be quite busy, but also hope that the Broncos can capture more headlines as they rebuild.