Like many Americans, I suppose, I know very little about Idaho, with potatoes and “Napoleon Dynamite” constituting my chief awareness of the Gem State. However, I learned today that the 14th-largest member of the Union has quite a rich educational history. If Adidas decides to be a student of what is going on in the Northwestern expanse, registrants at the College of Eastern Idaho might need to prove their brain power by cracking open their textbooks or engaging in online searches for copyright and trademark laws, as their institution’s new logo has met with claims that it resembles the corporation’s artistic identifier. 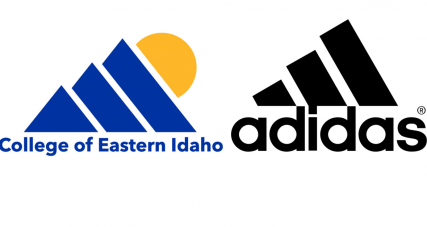 Could the College of Eastern Idaho find itself facing the wrath of Adidas over its logo? (Image via Idaho Education News)

“It’s always been the goal to be a true comprehensive community college,” spokesman Todd Wightman said July 11 of the school formerly known as Eastern Idaho Technical College. “After 17 years here, we are goal accomplished. We are now officially a community college as of yesterday, and now we can move forward in another way. I’m excited to be a part of that.”

The community presence helped to draft the potentially controversy-causing representation and has rejected any assertions that its blue mountains and rising sun mimic the Adidas emblem’s trio of black bars.

“There’s nothing the same, except they both have distinct shapes,” the school’s director of community relations and marketing said.

The Facebook page for the haven, whose transition to a community college that will offer up to 40 general education classes became possible through a May vote, replied to an unimpressed commenter by saying, “It may remind you of Adidas, but it is different,” adding that the symbol retains “the motif of our former EITC logo.”

Logo squabbles are nothing new in this industry and have provided us with ample material. Adidas has found itself taking on those who have dared to use insignias that bear any sort of resemblance to its own, but, as of yesterday, the company, which, since 2013, has enjoyed a profitable partnership agreement with Idaho State University, had not responded to an inquiry from Idaho Education News.

Wightman has said the rapid reconstitution of the school’s identity resulted in the selection of what might be just a temporary logo, with the courtship of a design firm to offer alternatives being at least a year away from intensifying.

What is your reaction? Does Adidas have grounds to seek to teach the school a lesson, or should it dismiss any notion of holding Wightman et al accountable?