So, remember how that high-end fashion company made a bag that looked frighteningly similar to IKEA's blue shopping bags? Also, you might remember that IKEA had a really great response to the subject, too. Well,it seems the fact that its plastic shopping bags are now considered high fashion has gone to the Swedish furniture company's head.

But that's neither here nor there. The real story here is that IKEA's big blue bag is getting a fancy redesign by Off-White founder and designer Virgil Abloh, according to The Fashion Spot. 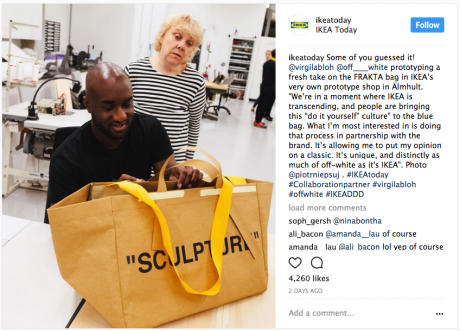 He also said the bag will be influenced by "that first phase of adult life, when you start making purchases for your space."

Would anyone have guessed that a single, seemingly uninteresting tote bag would reach this level of acclaim and popularity? It really goes to show how an item's functionality and recognizable branding can make a huge difference.