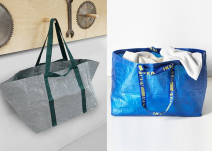 Ikea announced the redesigned Frakta bag (left), but still sells the original until the new one debuts in 2017. (Image via Twitter)

Anyone who has spent any significant amount of time shopping for household items with funny names at Ikea probably could recognize its Frakta tote bags. They're big, blue and feature the store's name in bright yellow lettering. The bag as customers know it, however, is about to be no more. Ikea announced that it has redesigned the bag as a woven, more understated item with a different color scheme.

According to AOL, the announcement came shortly after Ikea forged a partnership with Danish design company Hay. The bags, which Ikea plans to release in 2017, feature a white and forest green woven pattern with green straps.

Marcus Engman, design manager for Ikea, told Today that the design for the bag is part of a new collection of furniture and lighting designed by Hay.

"There are a lot of pieces with new constructions, new ways of doing things, but it is design that still blends in," he told Today. "There is also a longevity in it. We would like people to live with these things for a long time, because they are going to age in a beautiful way."

For those who want to hold on to a few of the classic blue bags, Ikea is selling the original style for 99 cents.