Immigration and Customs Enforcement Cracks Down on Fake NFL Gear 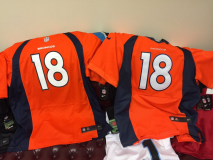 Super Bowl 50 is this weekend, and fans are still stocking up on merchandise, like T-shirts, hats and jerseys. However, it's important for customers to pay close attention to the products, as many fake items are popping up.

According to Denver7, Immigration and Customs Enforcement's Homeland Security Investigations (ICE-HSI) has seized counterfeit Denver Broncos merchandise, and said that customers can look out for certain things about the products to determine if the products are real. Bryan Cox, an HSI spokesman, pointed to one specific case of a fake Broncos jersey.

"Dead giveaway‚ we're playing the 'Brondos,'" Cox told Denver7. "This jersey, you put it in the wash once or twice, it might fall apart on you."

He added officially licensed uniforms will have quality stitching and smooth material without frayed edges.

"One dead giveaway that you can see from across the street [when asking] is this a legit jersey or not, is the captain's patch," Cox said to Denver7.

NFL fans know that the teams' captains have small "C" patches on their jerseys. And if they spotted a Peyton Manning jersey with that patch, they might think they got a special jersey. However, Cox said that no officially licensed jerseys will have that patch.

Just to be positive, customers should always look at the merchandise tag. If it's real, there will be an NFL sticker with a hologram indicating that it's official.

Some fake merchandise will have a tag that looks like a hologram, but that can be deceiving. Customers should move the tag to make sure that it's really a hologram, and not just a shiny piece of paper.

"That [money] can funnel guns, drugs, violence, you name it," Cox said. "So your $20, when compiled with all these others, goes to black market criminal activity."