The Impact of a Minimum Wage Hike 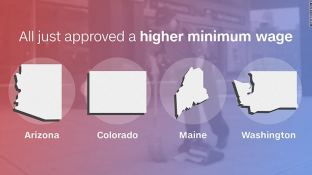 As more of President-elect Donald Trump's plans for the next four years surface, we've addressed how certain policies could affect promotional products professionals and their businesses. For many issues, like the proposed tariffs on Chinese and Mexican goods, industry folks see two potential sides—it could spur more domestic manufacturing and create jobs, but it could result in higher pricing for those who continue to import.

Kelly Bennett, president of KellyBDirect Inc., Oxnard, Calif., addressed some issues in a note to her customers yesterday. She looked at potential issues funding infrastructure, such as ports; the trade issues with China; and the possibility that Trump's administration raises the federal minimum wage.

"Personally, I think the minimum wage would impact our business more," Bennett said. "The [tariff on Chinese goods] impact obviously affects us as well. However, most of the products we deal with are promotional and advertising materials. They have to be manufactured somewhere. This business doesn't go away. That business and production will be driven domestically to the U.S. Not only are costs higher—period—if you increase the minimum wage, as well, their clients—the ad agencies and all that—are going to see a double whammy in terms of increased production costs and increased wages. It's going to make products expensive."

In a document detailing changing policies, Peter Resnick, CEO of Encino, California-based XB Logistics, a warehouse partner of KellyBDirect Inc., addressed that the minimum wage hike could affect companies that operate a warehouse or use a third-party company for warehousing and order fulfillment.

"Eight states will have minimum wage increases effective on or about Jan. 1, 2017," Resnick said in the document. "And, if you happen to operate in, or utilize a 3PL in California, you'll experience an additional 50-cent-an-hour increase, on the heels of a $1 increase earlier this year, with an additional 42 percent increase coming over the next five years. That's a 50 percent increase since January, 2016."

Do you think the minimum wage hikes could affect your business? Let us know.