Behind the Scenes at Debco's State-of-the-Art New Facility (and Housewarming Party!)

The grand opening of any new location—whether it be a franchise for a national restaurant chain or an independent local boutique—is always exciting. So, when we got an invite to head north to Canada and visit Debco’s brand new facility in the greater Toronto area, we jumped at the chance. The Debco Housewarming Party took place June 19, and we got the scoop on the supplier’s future plans and how it graduated from a 37,000 sq. ft. office and print shop to an enormous new 245,000 sq. ft. facility.

Debco’s been busy of late. The supplier joined HUB Promotional Group in 2018, and the move had been in the works even before that. That’s made the last year or so an exciting time not just for Debco, but for the entire HUB family. Trina Bicknell, senior vice president of sales for HUB Promotional Group, was particularly happy too see Debco grow.

“Everything that the Gallen family started in the whole Debco way of life and customer service, and what they’ve come to be known for, I mean, they have been Best in Canada 24 out of the last 25 years,” she said. “And, folks really understand who they are. They sort of were out of space at that point, and needed something to get them to that next level. This facility really gets us to that next level, so that we can be able to service customers even better. It allows us to have even more innovative products [and it] allows us to even service them faster, as well,” she continued. “So, for me, I see this space as the future. You know, this is the next level and where we wanted to go to, and sort of the next stop on our path, if you will.” 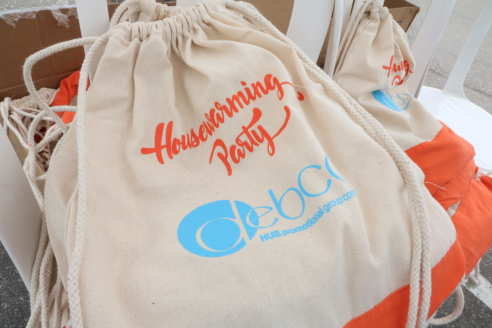 Speaking of paths, the road to Debco’s facility was less a straight line and more a winding one—for employees at its old facility, anyway. At least, that’s how Andrew Green, sales development representative for Debco, described it. Green said Debco’s former building had stock on one side and printing equipment on the other, with shipping in the middle. That setup worked great early on, but as Debco grew and added equipment, it led to some interesting logistics for staff.

“Eventually, we ran out of room,” said Green. “So, we took the stock out of that building and moved it to a warehouse off-site to add in more printing equipment. Eventually, as we grew, we kept adding equipment wherever we could find space. So, everything wasn’t laid out in the way it should have been, because we didn’t move the original equipment to put new stuff in, and we just said, ‘Oop, there’s a little corner over there, let’s put a machine.’ Eventually, we ended up where we would cross one side of the warehouse to unpack bottles, bring it back across the other side of the warehouse to print them, bring it back over to repack the bottles, and then bring it to the middle to ship them out. It was a nightmare of a graphic."

Green added that, ultimately, Debco ended up with four different warehouses for its product stock. The supplier was still able to fulfill rush orders and provide services as usual, but it was a lot for staff to manage. Now, the new space can accommodate all the company’s stock, plus its diverse range of printers. It’s also set up for efficiency, something evident to anyone who took the self-guided tour of the facility. The blue arrows pointing the way were a nice touch incorporating Debco’s brand color. And before each tour stop there was a station set up for scanning a QR code that unlocked a YouTube video explaining each segment of the tour.

Of course, no party is complete without food and drinks. Outside, there was seating for event guests along with food trucks and beer from Wasaga Beach Brewing Company. Mel Dobosh, lead marketing coordinator for Debco, filled us in on the idea behind the Housewarming Party. The guiding principles were simple, but effective. One, it would be a true party. And, two, the building would be the star of the show.

“We always want to have a theme so people not only remember you had a barbecue, but there’s something they can associate your barbecue with,” she said. “So this year, I was like, it’s our open house, but that’s lame and boring, let’s call it our ‘Housewarming Party. I just bought a house in November, so a housewarming party is like two and two, right? A new building and a new house. So we went from there, and we are something like 10 times the size of what we were before, so we thought the building itself would be the main focus.”

From there, Dobosh said Debco printed an image of the building schematic on microfiber sunglass cases to hand out at the event. “Every little piece of swag that you got from here was branded with our Housewarming Party brand and focused on the building,” she said.
Debco opened up the party to its distributor partners, too. We talked with Tracey Clingen, vice president of national programs at Genumark, Toronto, who told us that Debco and Genumark started as smaller companies around the same time and have worked together for years. When Clingen toured the new Debco facility, she said that one thing she noticed was how happy everyone looked. 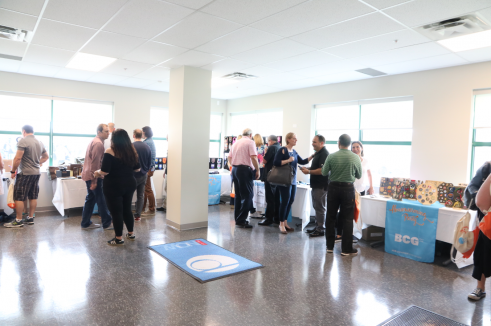 “I’m amazed at the changes,” she said. “Even the employees look so happy. When we were touring the new building, we were asking people if they liked the new space. Everyone working was thrilled with the extra room and the new equipment. It’s such a big jump from their old building to here, and from their start—working out of a basement, to this building—is incredible to see the change that’s taken place. I’m really happy for them.”

The new facility, combined with Debco’s integration into HUB Promotional Group, means some big and exciting future possibilities for the supplier. Some of them are already in motion—Bicknell said Debco will soon be adding pens to its product line, screen printing pens at its new facility and offering faster service to Canadian customers, in particular. And that’s just the beginning.

“Our plan also for the future is, around Q4, that we will be decorating products from our other companies—Origaudio, HandStands—and have those products here in this facility, as well,” Bicknell told us. “So, that will expand our product line to more tech products, which is something else that Debco customers have been asking for.”

7 Ways to Contend With Zoom Fatigue in Sales