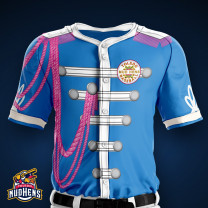 (Image via the Toledo Mud Hens)

Minor league baseball teams tend to do a great job getting creative with their promotional jerseys, and these new jerseys are a surefire hit. The Toledo Mud Hens are celebrating their Beatles theme night on June 16, and the corresponding jerseys are amazing.

As a tribute to the Beatles' "Sgt. Pepper's Lonely Hearts Club Band" album, the team will don these incredible jerseys, which are reminiscent of the outfits the band wore on the album cover.

Fans responded to the uniforms with immediate praise, and even ESPN's Darren Rovell called the uniform "a strong entry for uniform of the year," according to The Detroit News.

However, not everyone was on board with the Mud Hens' jerseys. It seems another minor league team, the Fresno Grizzlies, also will don a Sgt. Pepper-themed jersey on June 1. As a result, the teams are engaged in a social media war about who came up with the idea first:

Oh, congratulations. Since you're so organized maybe you know you can't "unveil" something another team already released & say "FIRST LOOK." https://t.co/ikFsdjcxHP

It's a tough call on who came up with the idea first, but whoever it was deserves a ton of praise for the viral hit.

The Mud Hens will also wear these Star Wars-themed jerseys for their Star Wars Night on May 27:

Our 'Star Wars Night' jerseys we'll wear on 5/27 will be auctioned off during the game: https://t.co/KVqUdgkgpo pic.twitter.com/P4HuhSF7JD

The team will auction off the two jerseys, with proceeds going to charity.