We've seen major fashion retailers majorly miss the mark in the past with their "trendy" fashion offerings, like Nordstrom's $425 "muddy" jeans. However, it seems Barneys really messed up with their $375 "Antifa" jacket, and the internet is not letting it off the hook, according to the New York Post.

Just for some background, the Antifa movement is a collection of anti-fascist groups with anti-capitalist leanings. In an effort to appeal to politically-motivated customers, apparel company Alpha Industries launched its M-65 Anarchy Cotton-Blend Field Jacket on Barneys' website. 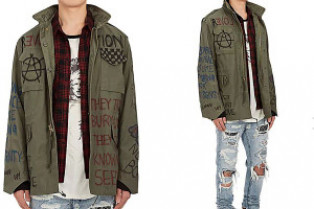 Barneys' "Antifa" jacket was a major failure for the company. (Image via Barneys)

The $375 military-style canvas jacket features a "stand collar" and "snap flap patch pockets," but its overall anarchist theme completely missed the mark with the exact demographic it was trying to win over. The jacket is modeled online with ripped jeans and Doc Martens, and the word "Revolution" is boldly branded over the front of the jacket. The anarchy symbol and plenty of other incendiary phrases are written all over the rest of the jacket.

In an effort to explain what on earth they were thinking, Alpha Industries attempted to clarify.

"Alpha developed the Barneys M65 anarchy jacket to encompass the artistic and graphic expressions of individuality, " the company said in a statement. "Self expression often inspires fashion, and fashion inspires self expression. Alpha Industries recognizes that the M65 field jacket has and will remain a canvas for all manner of self expression.

Making anti-fascism "trendy" so it's not taken seriously & dies out while capitalizing off anti-capitalist ideologyhttps://t.co/6wfxKj9Z0t

There's definitely a lesson in this for distributors. Barneys needed to take a more active role in bridging the gap of understanding between the manufacturer and the buyer. It seems like this idea needed to be vetted through more people than just Alpha Industries' marketing team.

The product has already been pulled from Barneys' website, although no statement has been released.