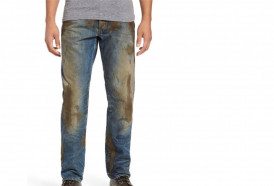 Nordstrom is hoping its new mud-stained jeans are on-trend. (Image via the Washington Post)

Fashion-forward denim has been going in an odd direction lately. First, it was distressed denim. Then, it was these see-through panels. And now, Nordstrom is selling $425 mud-coated denim, according to the Washington Post.

While end-users are looking for jeans that look worn-in (rips, shreds, holes, patches, dropped hems, etc.), Nordstrom might have gone too far for its latest look. The retailer unveiled its Barracuda Straight Leg Jeans, which thankfully come pre-dirtied with a "caked-on muddy coating," according to the item's description. And, consumers can snatch the destroyed designer denim for the low price of $425.

#Nordstrom is selling more than just fake mud jeans. Their latest release is as bold as ever. pic.twitter.com/H160hdq7FE

Even Mike Rowe, television host of "Dirty Jobs," got in on the anti-Nordstrom train.

"The Barracuda Straight Leg Jeans aren’t pants," he wrote in a blog post. "They’re not even fashion. They’re a costume for wealthy people who see work as ironic—not iconic."

Sometimes taking bold fashion risks can pay off, but it's important to avoid anything too polarizing. While it can be difficult to anticipate the public's reaction, promotional apparel suppliers and distributors need to take the time to consider if a product can be considered offensive.