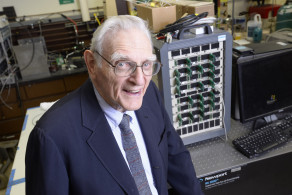 John Goodenough, inventor of the lithium-ion battery, has developed a safer, more cost-efficient alternative. (Image via University of Texas at Austin)

Plenty of scientists have been looking for alternatives to the lithium-ion battery, which, despite its widespread usage, comes with a bit of a risk. We previously reported that scientists developed water-based batteries that could serve as replacements. But, the latest innovation comes from the man who first created the lithium-ion battery itself.

John Goodenough, the 94-year-old professor of engineering at the University of Texas at Austin and pioneer of the lithium-ion battery, has developed a low-cost, solid-state battery that he and his team believe is safer and more efficient than the lithium-ion batteries on the market today.

According to a statement from the University of Texas at Austin, the new battery uses a sodium- or lithium-coated glass electrolyte with three times the storage capacity of a regular lithium-ion battery. It charges in minutes, and operates in temperatures ranging from -4 to 140 degrees Fahrenheit.

Early testing indicates that the batteries will have a lifespan of 1,200 charge-discharge cycles. What's more, the glass-based battery won't create the tiny fibers of lithium (dendrites) that can short circuit lithium-ion batteries.

"The glass electrolytes allow for the substitution of low-cost sodium for lithium," UT senior research fellow Maria Helena Braga said in the statement. "Sodium is extracted from seawater that is widely available."

Goodenough and Braga are currently working to secure several patents for their research, and hope to develop and test the new materials in electric vehicles and energy storage items in the near future.

For a guy whose last name is Goodenough, it seems like even his own revolutionary inventions aren't.