This morning, more than three years after their filing of a lawsuit against Iowa State University, former students Paul Gerlich and Erin Furleigh must have woken on quite a high. Yesterday, the State Appeal Board voted to pay the two $150,000 in damages stemming from their assertion that the institution violated their rights in banning T-shirts that include its logo and mascot and a cannabis leaf. The garments had served as means for them and peers to draw attention to their National Organization for the Reform of Marijuana Legislation (NORML) chapter.

Marijuana has proven an intense topic in the Hawkeye State as of late, particularly through discussions of its medicinal value. Yesterday’s partial settlement announcement touched on recreational use of the drug, but, more importantly, it addressed the legality of trying to protect and promote a brand through the supposed suppression of that which potentially damages the said possession. In bringing the higher learning destination to court, Gerlich and Furleigh ended up gaining three victories against the site, with the latest triumph joining a 2016 ruling by U.S. District Judge James Gritzner that declared Iowa State University violated their constitutional rights in forbidding them from using its symbols to publicize pot use, especially since NORML, as a recognized student group, has permission to use school trademarks and a June-issued 8th U.S. District Circuit Court of Appeals ruling that said the institution had committed what the Associated Press dubbed “viewpoint discrimination” in opposing the then-registrants’ political message. 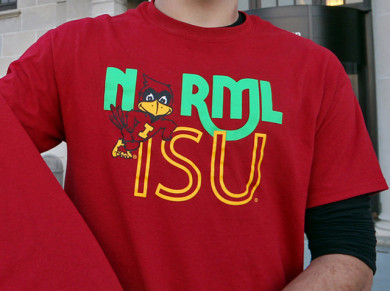 The financial cost of the whole matter includes $193,000 in appellate attorney fees to law firms that represented the victorious plaintiffs, a sum that, like the payout to them, will come from the state’s general budget. Since Gritzner will soon determine trial costs accrued in the matter, Iowa State University, whose spokesman, John McCarroll, has said it will use the verdict to guide future trademark matters, figures to irk a few taxpayers, who, according to the AP account, will foot the bill.

The entire case has its roots in a November 2012 Des Moines Register article on the group’s fight to legalize marijuana, with the members’ shirt bearing the aforementioned logo, mascot and leaf and the declaration that “Freedom is NORML at ISU.” Soon after then-Governor Terry Branstad desired to know whether the pro-weed platform had gained ground through the university’s assistance, administrators cracked down on the use of logos on shirts that depict “drugs and drug paraphernalia that are illegal or unhealthful.” That alteration landed their employer in court and ultimately led lead attorney Robert Corn-Revere to declare “Any time you have courts uphold your constitutional rights when you are challenging state authority, that’s what’s really important.” The plaintiffs’ counselor also tabbed the verdict “an unambiguous win for our clients and for the First Amendment and for an understanding that violating people’s rights isn’t free,” adding “One reason we urge universities to settle early is to avoid these kinds of expenses.”

That final thought is a pretty powerful one, especially, and I mean no harm here, when we live in such litigious times. In other words, the legal system will certainly hear more arguments about the complete legalization of marijuana, but, as the Iowa State University case proves, it already has an unwavering comprehension of the proper exercise of rights regardless of what the debated topic is. Therefore, this registers more as a victory for upholders of free speech (Iowa State must allow the NORML group to produce garments that feature marijuana) than it does for pot advocates, but the current collegiate and alumni just might end up being trailblazers for their cause, too.