But it may well have read "Shots Fired."

That's because the shirt looks similar to one from RAYGUN, a printing, design and apparel company based in Des Moines. At the end of 2020, the company, which is decidedly liberal in its political leanings, released a T-shirt that reads "Kim Reynolds Is Really Bad At This," a reference to Gov. Reynolds' handling of the pandemic.

According to the Des Moines Register, within hours of Gov. Reynolds' shirt going up on social media, RAYGUN responded with a Facebook post of its own. The post read "Imitation IS the highest form of flattery" and included the following graphic featuring Gov. Reynolds' design and a new design RAYGUN whipped up in response: 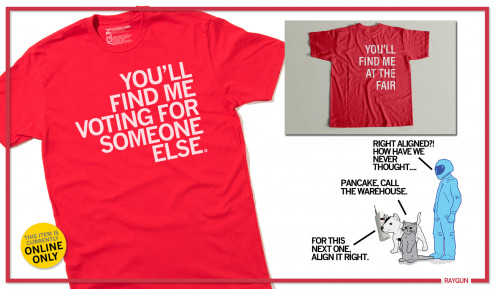 The shirt, of course, comes in red, and its text is an overt jab at Reynolds. (In a more subtle jab, the text is also right-aligned.) RAYGUN will donate a portion of the proceeds from each sale to organizations it supports.

RAYGUN's post announcing the shirt racked up 730 reactions and 76 comments. And, with it, the Great Iowa T-shirt War officially escalated to DEFCON 1.

The question is, did Gov. Reynolds—or, more likely, her team—intentionally crib RAYGUN's style with her shirt, or was this all just a coincidence? While the shirts do bear a resemblance, the design is fairly generic, and Reynolds' version leaves out the highlighted words in RAYGUN's original anti-Reynolds tee.

We may never know, but it's a fair question to ask, especially given RAYGUN's outspoken shirt-based opposition to Reynolds in the past and the state of modern political campaigning, where merch has become the latest medium for officials to directly call out their opponents.

(This is also continues the odd but not unwelcome trend of state governors making the news for merchandise-related reasons.)

We'll see if Gov. Reynolds responds with a new shirt of her own, but until then, all we can do is take cover and hope for a peaceful resolution to the T-shirt war.