Today is St. Patrick's Day. For many, it's a day to wear festive green clothing or eat traditional Irish foods to celebrate Irish heritage—whether they're actually Irish or not. For others, it's a day to pack the pubs and down countless pints of Guinness. Somewhere, these two worlds merged, as many St. Patrick's Day items, such as T-shirts, feature the theme of heavy drinking, which some people see as as offensive to Irish people.

According to The Washington Times, Irish Central, a New York-based publication for the "global" Irish community, reported that 78 percent of people polled agreed that "it is time to stop the sale of offensive St. Patrick's Day merchandise." 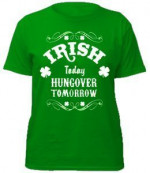 However, 13 percent said they think that some people are too sensitive, and 5 percent said, "live and let live."

The Ancient Order of the Hibernians (AOH), an organization founded in 1836 for American Irish Catholics founded, currently has a petition on change.org urging Amazon to stop selling "defaming merchandise targeting Irish Americans."

The petition specifically mentioned T-shirts with messages, such as "Kiss Me, I'm Irish or Drunk or Whatever," "St. Patrick's Day, Good Day to Get Drunk," "Let's Get Ready to Stumble" and "Irish Today, Hungover Tomorrow."

"These Amazon products [that] perpetuate bigoted cliches and tropes directed at people of Irish heritage certainly exceed Amazon's prohibited product guidelines," the petition said. "We ask why then are they permitted for sale at Amazon?"

At the time of this article's publication, the petition had received 482 of its 500 signature goal.

"It is time for Amazon to remove these reprehensible products that are prime examples of despicable stereotypes that target people of Irish heritage," Neil Cosgrove, the anti-defamation officer for the AOH, said to The Washington Times.