Is This AI-Designed Clothing Line the Future of Apparel?

With Amazon taking the clothing world by storm with its algorithms and data-driven apparel lines, we've been wondering what the next step would be. Stitch Fix followed suit with its own algorithms, and Kohl's subsequently did the same. Now it looks like we've got a new designer making waves: artificial intelligence.

According to Vice, a company founded by two recent MIT graduates called Glitch, is using machine-learning software to design clothing. The two started with an AI version of the little black dress, and they're hoping it can be the catalyst to get women to enter into STEM careers. Plus, 50 percent of the dress' sales are being donated to AnitaB.org, an organization for women in STEM.

The design of the dress is pretty unexpected. It features a normal sleeve on one arm and a bell sleeve on the other arm. Then, there's an asymmetric silhouette. 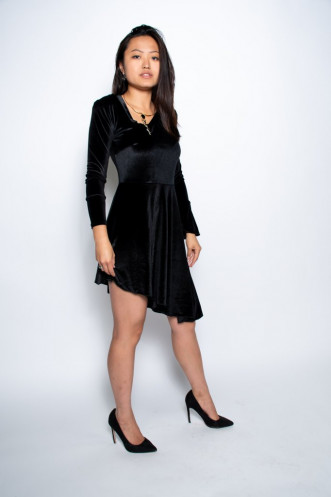 “On the surface may look like a nice dress or something,” said Emily Salvador, one of the founders. “But underneath is this powerful statement about your affinity for tech, or your interest in AI and computation.”

“We are trying to democratize the usage of these AI systems for the public by releasing these tools,” said Pinar Yanardag, the other founder of Glitch. “If you don’t have these high-end CPUs it is very difficult to actually create these systems. We think in the near future this tech will be much cheaper and more accessible, but right now that isn’t the case.”

One of the interesting components of the Glitch system is that users are able to generate and choose their own designs. All this data could be useful to other designers who are wondering what their consumers want.

So, while robots are not currently autonomously creating our apparel, it's an interesting intersection of design, technology and clothing.