Is This the Most Merchandise-heavy Election Year Ever? 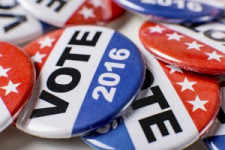 Previously, we reported on the amounts each presidential candidate was spending on promotional products. Now, we can take a look at how much supporters are buying, and which candidates are selling the most products.

According to The Fiscal Times, Donald Trump and Sen. Bernie Sanders are leading the pack in terms of merchandise. Trump and Sanders supporters reportedly have bought close to $20 million in merchandise, including Trump's trademark "Make America Great Again" caps and Sanders' various "Feel the Bern" items.

Laura Ries, president of branding consultancy Ries & Ries, told The Fiscal Times that this boom in campaign merchandise could indicate an increase in merchandise as a fundraising tool in future campaigns.

"I'm sure we'll see more of this," she told The Fiscal Times. "Merchandise is a great way of getting our message out there, of engaging people and raising money."

Pennington added that since the campaign began last year, it has sold more than 800,000 individual items, including 207,000 T-shirts and 44,000 coffee mugs. The primary manufacturer of the campaign merchandise was Tigereye Designs, Greenville, Ohio.

Trump, meanwhile, has raised more than $6 million from Trump-branded items, which campaign spokesperson Hope Hicks told The Fiscal Times is a majority of the campaign's individual contributions.

As November's general election moves closer, Americans can expect a steady stream of campaign-themed promotional products. And at this rate, who knows what the 2020 election could bring?