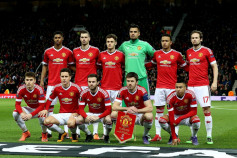 ISIS has banned its supporters from wearing any soccer jerseys from western teams. (Image via Manchester Evening News)

Yes, you read that correctly: ISIS has banned supporters from wearing certain soccer jerseys, according to Complex. According to a decree, fans caught wearing gear in support of Manchester United, Chelsea, Manchester City, Barcelona or Real Madrid could receive 80 lashes.

ISIS chiefs also have prohibited Adidas and Nike jerseys, as well as Lionel Messi and Christiano Ronaldo uniforms. Additionally, the decree banned U.S., France, England and Germany international shirts. There's no explanation for the ban, but some have speculated that ISIS does not want its supporters wearing anything symbolic of the western world.

Pictured is an image of the ISIS decree illustrating the ban. (Image via Memri JTTM)

Not to mention, tensions have been running high between ISIS and FIFA. In May, three ISIS members shot 16 Real Madrid fans in a cafe, according to Complex. The terror group even banned soccer referees from an ISIS stronghold for following the rules of FIFA, because FIFA rules were deemed "a violation of Allah's command and the Sunnah." Apparently, ISIS went so far as to create its own version of soccer, called "Qisas" that's keeping with the group's standards.