ISIS T-shirt sold from Indonesia; Image via Business of Fashion

According to a lengthy investigation from Business of Fashion, there has been a recent surge in ISIS-branded merchandise online. Even physical marketplaces have been retailing the ISIS symbols and slogans on various articles of clothing.

The branding, featuring the Shahada and the prophet's seal, is available on items from T-shirts to baby onesies. In the group's video propaganda, subjects commonly are sporting headbands, flags and clothing with ISIS branding, but, now, it's becoming more ubiquitous throughout the Middle East, according to Business of Fashion. There's a movement gaining traction called "jihadi cool," which aims to recruit young people for the group's violent acts of terror. 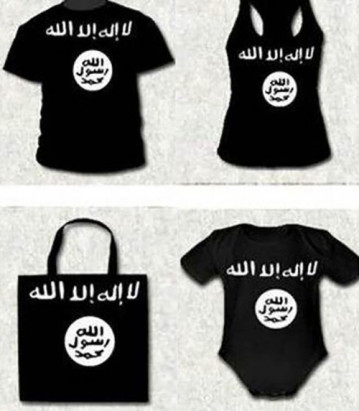 "There is an arguable case that so-called 'jihadi cool,' which might be exacerbated by these kids of garments, may be be a factor that feeds into the decisions of younger people, in particular, to engage in terrorist activity," said anti-terrorism expert Fiona de Londras of the Birmingham Law School in the U.K.

Previously, only ISIS personnel were wearing the branded clothing, leaving a gap in the market for everyone else. Now, it is much easier to find the articles of clothing in the markets and on the Internet. Seemingly, there is no link to ISIS finances, but it's certainly contributing to the group's political agenda.

Certain restrictions are in place to outlaw ISIS-branded clothing. Facebook has shut down pages retailing the apparel. In the U.K., the Terrorism Act 2000 prohibits wearing any suspicious clothing that indicates a person is a member of or supports a forbidden group. However, it doesn't seem like police will arrest someone wearing such a T-shirt.