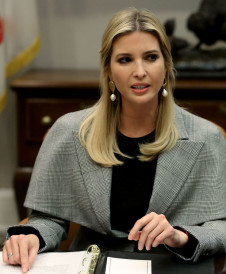 Ivanka Trump announced she would be shutting down her clothing line. | Credit: Getty Images by Mark Wilson

Ivanka Trump's clothing company had its fair share of ups and downs over the past few years. Back in 2016, the company had to act quickly to recall two styles of scarves after the CPSC found they did not meet flammability standards for clothing. Then, critics urged shoppers to boycott the line, and retailers, like Nordstrom and Neiman Marcus, decided to stop restocking the brand. However, the clothing line was still thriving amidst the boycott, so it seemed like perhaps the company was stable.

It was announced this week that Ivanka Trump made the decision to shut down her clothing company to pursue a career in public policy, according to CNN.

"When we first started this brand, no one could have predicted the success that we would achieve," Ivanka Trump said in a statement, according to CNN. "After 17 months in Washington, I do not know when or if I will ever return to the business, but I do know that my focus for the foreseeable future will be the work I am doing here in Washington, so making this decision now is the only fair outcome for my team and partners."

Abigail Klem, the current president of the Ivanka Trump brand, said in a statement that the decision was incredibly difficult for Ivanka.

There has been a lot of speculation surrounding this recent announcement. The news came soon after a major Canadian clothing retailer said it would no longer stock the brand. The company has also been a constant source of bipartisan backlash, especially after Trump aide Kellyanne Conway told the American public to "go buy Ivanka's stuff" during a "Fox & Friends" interview. Perhaps Ivanka Trump felt the pressure to commit to the world of politics, rather than wear two hats. Or, it could be that President Trump's new tariffs and proposed "Made in U.S." regulations would have posed potential sourcing issues for the company.