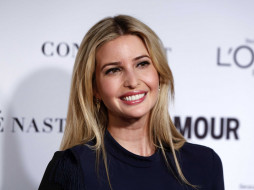 You know what they say—all press is good press. That, at least, seems true when it comes to Ivanka Trump's clothing line. While her brand is embroiled in a boycott, and multiple retailers have dropped her label, she seems to have come out unscathed. Not only that, but her sales numbers supposedly saw a huge jump in February, according to CNBC.

At first, it seemed like things were not looking good for Ivanka Trump merchandise. Sales took a dive in January, with a 26 percent drop online. But in February, Slice Intelligence reported that online sales of Ivanka Trump's clothing grew 207 percent from January. Amazon sales made up most of those numbers, and Amazon became the No. 1 seller of the brand, replacing Nordstrom.

“Since the beginning of February, they were some of the best performing weeks in the history of the brand,” Abigail Klem, president of the brand, told Refinery29. “For several different retailers Ivanka Trump was a top performer online, and in some of the categories it was the [brand’s] best performance ever.

“We actually feel super-optimistic because, I think, one, a lot of people support Ivanka, even across both political parties," she continued. "And then I think a lot of other people feel like, 'Oh, I didn't know Ivanka had a shoe line. Oh, I didn't know she had a handbag line.' And they're buying it."

Ivanka Trump has separated herself from the business now that her father is president. Ethics counselors advised the company not to use images of Ivanka on new promotional and marketing materials. While the brand is in the middle of this transition phase and trying to determine what it is, the numbers prove whatever it's doing is working.