Monday's eclipse was the must-see event of the decade (other than this Mayweather-McGregor fight coming up, I guess), and everyone was peering up to see the moon cut in line. To try to capitalize on the (hopefully protected) eyeballs, Jack in the Box wanted to send a giant version of its iconic cap to put on the moon before it made its way across the sky.

The problem was, they procrastinated just a bit too long to raise the $66 trillion to put a 2,000 mile high, 1,000 mile wide hat on the moon, and Project Moon Hat was doomed. 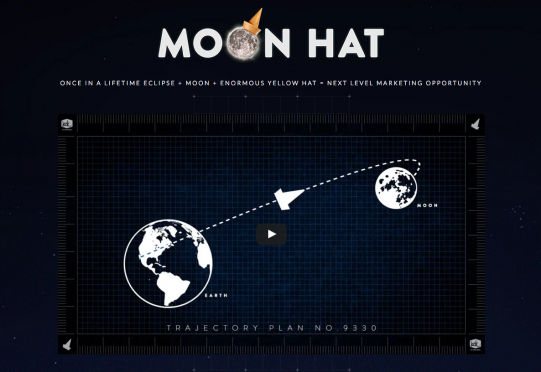 Jack in the Box wanted to put a giant version of its iconic Jack Hat on the moon.

"Sure, it's ridiculously expensive and a tad bit over-the-top," the company said on its Project Moon Hat site. "But if it takes launching a 4 trillion ton Jack hat into space to put a mouthwatering Jack in the Box burger in your mouth, then that's exactly what we'll do."

OK, for those thinking, "this cannot be serious," you're absolutely right.

If you felt inclined to donate to the cause of putting a monstrous hat on the moon before the eclipse, your brand commitment to Jack in the Box was rewarded with an opportunity to donate to No Kid Hungry, a nonprofit that provides children with nutritious food and informs families on cooking healthy and affordable meals.

So, while the record for largest promotional product placed on a celestial body is still up for grabs (and we hope someone accomplishes that feat within our lifetime), Jack in the Box used the joke of a tangible product to raise money for a worthy cause.

(Editor's note: In all honesty, we're not sure we want to see advertising on the moon. It looks pretty good as it is.)