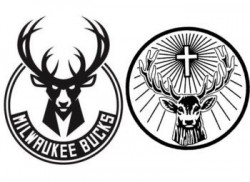 Are these logos too similar? Jägermeister thinks so. (Image via BizTimes)

What do Jägermeister liquor and the Milwaukee Bucks have in common? One very important thing. At least that's what Jägermeister is trying to prove, according to Yahoo. The company filed an application with the U.S. Patent and Trademark Office last week to oppose the Bucks' recent registered trademark.

The image in question is the Bucks' deer head logo, which looks almost identical to Jägermeister's logo. When the Bucks moved to trademark the logo, Jägermeister stepped in to petition the team.

According to Milwaukee's BizTimes, Jägermeister claimed that the Bucks adopted the logo "in bad faith with an intent to cause confusion and deception, to create a false suggestion of connection or association with (Jägermeister), and to grade on the fame, popularity and goodwill associated with" the deer head image.

Jägermeister is claiming that it's concern is a hypothetical situation where the Bucks have a bad season, and subsequently, fans decide to switch from Jägermeister to alternative forms of alcohol so they're not reminded of the team's poor record.

While it would require a federal lawsuit seeking an injunction to stop the Bucks from using the trademark at all, the registration opposition is simply to block the Bucks from registering the new logo.

The Bucks have until Jan. 17 to give Jägermeister an answer.

Recently, there's been an uptick in trademark battles over sports team logos. While this might not seem applicable to your business, it's important to always do your research when it comes to choosing an original logo. That way, you can avoid these lengthy and arduous legal proceedings.