If This 'Jane Walker' Logo Is to Be Believed, Diageo Thinks Women Are Intimidated by Scotch Whisky 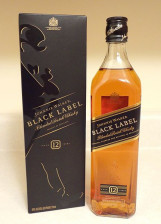 In an effort to promote its products to women, Diageo has announced that it will be selling a limited-edition run of 250,000 bottles of its Johnnie Walker brand of blended Scotch whisky under the name “Jane Walker.” For the run, bottles and packaging will feature a silhouetted woman wearing a top hat and high heels, replacing the brands iconic Striding Man logo.

Stephanie Jacoby, vice president of Johnnie Walker, spoke to Bloomberg about the intended message behind the Jane Walker campaign. “Scotch as a category is seen as particularly intimidating by women,” she said. “It’s a really exciting opportunity to invite women into the brand.”

While this may sound good-natured, there’s a great amount of risk that comes with marketing to women, or to any specific group of people. Are women really intimidated by Scotch whisky—and by that, we mean all women? Clearly, such a generalization can do much more harm for a brand than good, especially if it’s paired with packaging or labeling that panders to a stereotype, such as by depicting a woman in high heels.

It’s not as if Diageo didn’t have any recent examples to look toward as warnings against such marketing. The Doritos debacle isn’t even a month old at this point, and if anything was made clear by the outrage following the suggestion by PepsiCo’s CEO that “lady Doritos” could become a thing, it’s that women don’t like to be told that they are dainty or delicate or in any way different from men with regard to how and what they eat.

Now, it should be said that not everything about Jane Walker is problematic—for every bottle produced, Diageo is donating a dollar to organizations that promote women, including Monumental Women and She Should Run. This does, however, raise the question as to why Diageo couldn’t just donate to these charities in the first place while also creating campaigns to bring more women into the whisky industry. Surely, such a program would go a lot further in bringing more female consumers to the brand, rather than alienating them with stereotypical imagery on packaging and in marketing campaigns.

Despite the repeated failures of such campaigns over the years, it’s unlikely that this will be the last we see of demeaning female-focused marketing. As marketers look for ways to make products appealing to the smallest of social substrata, it’s likely that we will continue to see the occasional misfire, such as with “lady Doritos.” Whether or not we need gendered branding, it is clear that marketers think we do. Until we convince them otherwise, that’s where they’ll be putting their money.

Sponsor Content 3 Great Ways for You to Compete With Harry & David, Mrs. Field’s, Costco and Other Giant Direct Sellers