It's really amazing how some people can turn around a half second of life into a poster, T-shirt or promotional product. Something that resonates with an audience can become immortal if the right person can capitalize on it.

We've written before about "micro-moments," or these tiny happenings that become memes and mainstays of the cultural zeitgeist. They're especially prominent in the sports world, as one play, post-game interview or announcer's call can be remembered for a long time.

The latest in this series of moments is Philadelphia Eagles center Jason Kelce's speech at yesterday's Super Bowl Parade in Philadelphia, which sent shudders down the spines of the FCC and local news producers, but darn near started a riot among the fans.

His profanity-laden speech centered around the sentiment that Philadelphia Eagles fans are, to put it mildly, sometimes hard to love. This segued into a popular chant of "No one likes us, we don't care." (The chant continues but we can't print it here.)

Adding to the powerful speech, Kelce, all 6'3" 295 lb. of him, was squeezed into a flamboyant Mummers outfit, complete with sparkling shamrocks and sultan hat. 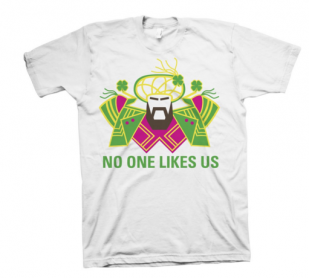 It's a 21st century way of selling T-shirts in the parking lot. It takes advantage of immediate hype around an event and monetizes it.

Heck, I still have a T-shirt celebrating an Argentinian sophomore point guard at my college from 2010. He never went to the NBA. The shirt's message would be lost on pretty much anyone who didn't follow Temple basketball in the last 10 years. But I spent money on it. And doesn't that say something?