Jay-Z's Brand Is Being Sued Over Baseball Hats 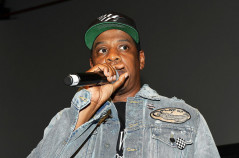 Jay-Z once rapped, "I will not lose, for even in defeat, there’s a valuable lesson learned so it evens it up for me." So, at least, even if his company, Roc Nation Apparel Group, loses this lawsuit, it won't be a true loss.

Iconix Brand Group is suing Roc Nation, along with New Era, Major League Baseball Properties and others, over the use of branded baseball caps. The company is claiming it paid $204 million to Roc Nation in 2007 for certain intellectual property, and that a recent line of baseball hats undermines the deal, according to UPROXX. Now, Roc Nation is countersuing the company for breach of implied license.

This is where it gets a little complicated. Roc Nation's attorney Andrew Bart said that Rocawear Licensing sold the Rocawear business to Iconix in 2007, but Roc Nation wasn't founded until the following year, so it's not included in the purchase agreement. According to the 2013 agreement, Roc Nation agreed to sell Iconix the Roc Nation-branded goods, as long as Roc Nation gave permission, but that agreement did not grant Iconix ownership of the brand mark.

“[I]n 2013 Plaintiffs wrongfully took the position that the APA had conveyed to them the right to sell apparel under the ROC NATION mark,” Bart wrote in the countersuit filling. ”Since RNAG does not own or operate manufacturing facilities directly, Section 10(i) of the License expressly authorized RNAG to seek out and engage third-party manufacturers to produce Licensed Products, provided that such third-party manufacturers signed a Manufacturer’s Agreement.”

Jay-Z has been asked to be dismissed from the entire lawsuit, since he feels, as simply the owner, he has no involvement in the case.

We'll see how this plays out for Jay-Z and his company in the future months.