Nothing in Philadelphia’s sports news cycle will be topping the Eagles’ victory in Super Bowl LII for a long time, but another nice bit of fortune reached us Jan. 24, with the Baseball Writers’ Association of America electing Jim Thome, who played 391 games for the Phillies, to the Baseball Hall of Fame. Though he had some memorable moments during his four-season stint with the Fightins’, including the smacking of his 400th home run in June 2004, the 47-year-old will enter the hallowed halls of the Cooperstown-situated National Baseball Hall of Fame and Museum as a Cleveland Indian, having logged 13 years with the franchise, and has expressed a desire to have his cap be free of the organization’s controversial Chief Wahoo logo.

His long-time employer announced Jan. 29 that this campaign will mark the last one during which the Indians will use the emblem on jerseys and stadium signs, although it will not stop selling merchandise depicting it in Northeast Ohio and its spring training site in Goodyear, Ariz. The insignia has received ample rebukes, as opponents feel it disrespects Native Americans, and it appears that Thome recognizes the breadth of the backlash in stating Friday that he prefers to wear the block-C, which the club has come to use prominently in recent seasons, instead of the Wahoo logo on his hat, noting “because I think it’s the right thing to do.” 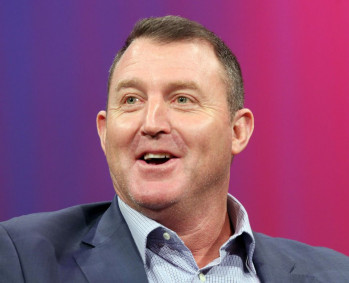 Jim Thome hammered 337 of his career 612 home runs while a Cleveland Indian. | Credit: The Plain Dealer

Given that he played nearly 60 percent of his 22-year career as a member of the Tribe, for whom he lofted a franchise-best 337 homers, earned three All-Star nods and captured the 1996 Silver Slugger Award, Thome definitely has the clout to ask Cooperstown officials to hear him out, and, with slightly under six months to go until his July 29 induction into the New York space, one could expect a spirited exchange between the parties.

“I think I need to have a conversation with the Hall of Fame because of all the history and everything involved,” the owner of 612 round trippers (the game’s eighth-highest total) added of not wanting to gain immortal status while donning the soon-to-be diminished logo.

Some very notable names have entered Cooperstown having logged long stints with the two-time defending American League Central Division titlists, including Lou Boudreau, Bob Feller, Bob Lemon and Early Wynn, and while future clubs will likely field more superstars ticketed for Cooperstown, Thome figures to be the last standout who will even have to ponder what will adorn his hat. That, in itself, makes his enshrinement far more compelling than one might expect, even though Thome collected an impressive 89.8 percent of the scribes’ votes as a first-ballot nominee. Yes, he had an amazing journey in crushing fastballs for the Indians, Phillies, Chicago White Sox, Los Angeles Dodgers, Minnesota Twins and Baltimore Orioles, but his decision to offer opposition to the Chief Wahoo logo adds a significant voice to the call to do away with other potentially offensive caricatures, team names and mascots. As the year unfolds and the current crop of Indians plies its trade, Thome’s talks with the museum’s powers that be should be an interesting back-and-forth to follow.