We didn’t need to watch the debate last night to know that the 2020 presidential election is heating up. We’re a little over a month until election day, and the race is decidedly contentious. We’ve done a good bit of reporting over the past couple of years and election cycles about how political merchandise has evolved to be no longer just pro-candidate, but also equally (if not more) anti-opponent.

Following the report by the New York Times that President Trump paid only $750 in federal income taxes in 2017, democratic challenger Joe Biden's presidential campaign wasted no time before pouncing on the outrage and turning it into merchandise. 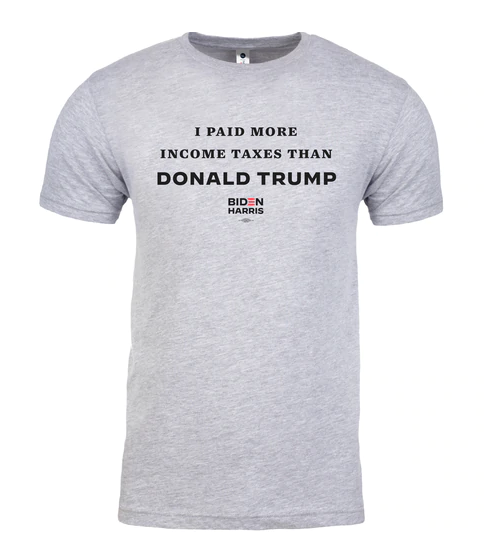 There are buttons and stickers in addition to the T-shirt. Biden campaign staff are working overtime right now, using every opportunity to turn news and memes into merchandise. Just a few hours after the debate ended, the campaign is already turning one quote into a T-shirt: “Will you shut up, man.”

“Will you shut up, man.” -@JoeBiden https://t.co/AQHZdedSxf

It was a blink-and-you-missed-it moment, but those who did catch it lit up social media about it. So, it was only natural for the Biden campaign to try to capitalize on that.

At least that that shirt was for sale. Right now, the link goes to a 404 error on the Biden campaign store. Maybe the demand was high, or maybe they took it down.

The question is, like we saw with Kamala Harris during the Democratic primary campaign, was this a planted quote with the knowledge that they’d use it for merchandise? That’s pretty doubtful, considering Harris’ was much more lengthy. “Will you shut up, man” tends to roll off the tongue more spontaneously.

We've seen this from both sides, by now. The Trump campaign store currently has a T-shirt mocking a gaffe Biden made during a campaign event with a potential voter, and there are the Trump straws we've written about in the past, among other items.

For Biden, though, this is probably going to be an unofficial slogan for the campaign and supporters for the next month or so. Or, at least until the next debate, when we do this all over again.