Cleveland Browns quarterback Johnny Manziel reportedly partied in Vegas wearing a blonde wig and fake mustache, referring to himself as "Billy." Now, according to Cleveland.com, merchandisers are cashing in on the odd story by making "Billy Vegas" items, such as T-shirts, candles and paintings.

The item that stood out to us most was this T-shirt from Fresh Brewed Tees, which depicts Manziel in his blonde wig Browns uniform, with the name "Billy" and Manziel's uniform number on the back. 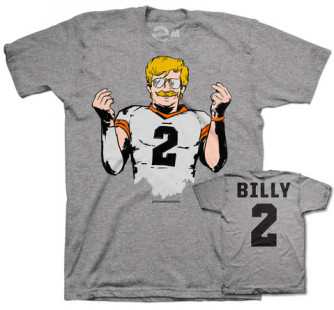 Here's to hoping Manziel moves away from his "Johnny Football" college nickname to a more mature "Billy Vegas" NFL nickname.