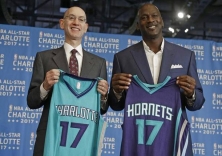 The Charlotte Hornets will wear uniforms with the Jordan logo, not the Nike swoosh. (Image via Twitter)

Set to commence its eight-year uniform partnership with the National Basketball Association next season, Nike scored major points Tuesday thanks to one of the game’s immortals. Michael Jordan, the league’s fourth-all-time-leading sniper, will outfit the Charlotte Hornets through his eponymous line, making the Eastern Conference club the first professional team to don the legend’s brand.

Already aligned with the universities of Michigan and North Carolina, the latter being the location where he prepped for the amazing professional journey that saw him capture six championships as a Chicago Bull, the 54-year-old is strengthening his brand’s subsidiary status through the partnership with the Tar Heel State franchise. Also the principal owner and chairman, Jordan is making the Hornets the buzz of apparel discussions by including them in what has proven a profitable brainchild since its 1984 inception.

The Jordan Brand generated $2.8 billion in revenue last year, an 18 percent increase on the previous year. Though it earned initial renown as a shoo-in for producing staggering shoe sales, the line has come to include clothing and assorted gear, and his athletes will look to become the beneficiaries of one of the most iconic images in sports, the “Jumpman” logo, when fall falls upon us.

“The Hornets will be the only team in the NBA wearing Jordan Brand uniforms, and with the agreement taking place, the Hornets Fan Shop will have even more of the popular Jordan Brand Hornets merchandise than it has had previously,” a franchise-issued press release said of the aesthetic appreciation and financial uptick that the new uniforms will likely inspire.

As the successor to Adidas, the pro game’s longtime outfitter, Nike will again be relying on the Jordan Brand to yield continued growth, with a Forbes article presuming that the titan will carefully track sales to determine if more professional squads could benefit from the brand affiliation.

A decent season from the Hornets would definitely help to attract league interest and even consideration from non-hoops organizations. A young roster, with guard Kemba Walker as the undisputed star, saw a 12-win decline last season from the previous campaign, when it lost a seven-game first-round playoff series to the Miami Heat. With a 36-46 mark, the Hornets missed the postseason, finishing 11th in the conference. They will join 13 other teams as a lottery constituent, with the odds of adding a solid player to attire in the Jordan Brand uniform looking pretty good.